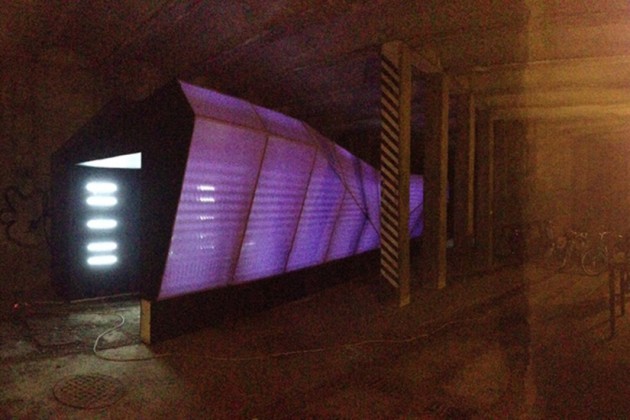 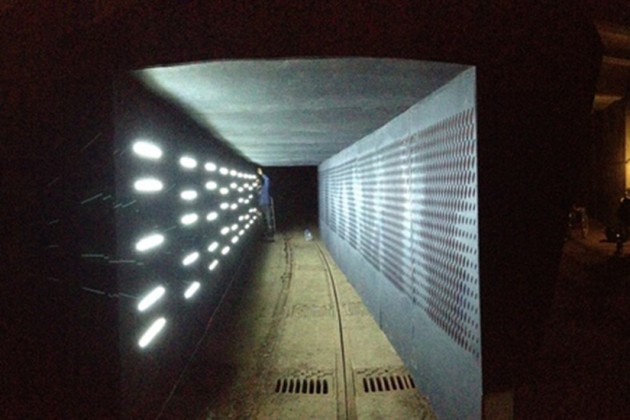 It’s dark. It’s glowing. It looks like it belongs in a sci-fi movie. But it’s not a set piece from “Blade Runner,” it’s “iGlow,” Dupont Underground’s very first art installation.

iGlow, which first debuted in the Georgetown Glow last December, is a 36-foot long glowing lavender tunnel that has been described as looking like a “streetcar of the dystopian future.” The walls of the illuminated tunnel are perforated, and to outside observers, people walking through it appear to be “warped into pixels.”

An intrepid group of ten assemblers, led by Hiroshi, dragged the disassembled iGlow to the southern terminus of Dupont Underground — 1000 feet from the nearest entrance — and rebuilt it in the darkness of the abandoned streetcar tunnel. Here it took on an entirely new character; perhaps a technological worm, or the train from the Wong Kar-wai movie 2046, zooming through a post-apocalyptic Hong Kong. The segmented structure of the streetcar tunnel surrounding the segmented structure of iGlow complement and heighten the effect of each, throwing light and shadow in an entirely new way.

But don’t expect to be able to wander in and view the new installation in person anytime soon, said Dupont Underground board member Philippa Hughes. Because the art space, which is located in an abandoned trolley tunnel near Dupont Circle, is not yet open to the public, those interested in viewing iGlow in person must make an appointment to do so.

Dupont Underground is expected to open its doors to the public later this year when it unveils the winners of its Re-Ball design competition.

“[iGlow] is a great preliminary way to show what the DU space is capable of,” Hughes added. “I’m super excited to see all the proposals for Re-Ball.”