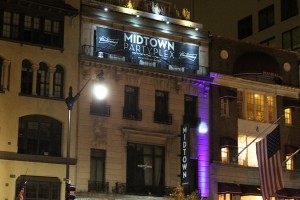 (Updated at 2:55 p.m.) A Dupont Circle bar got a taste of young adult literature from the D.C. Alcoholic Beverage Control Board this week as the panel sought to chide the business over noise.

In an order Wednesday renewing the liquor license of Midtown Partyplex at 1219 Connecticut Ave. NW, the board wrote that “the eyes can choose where to look. But the ears can’t choose where to listen.” The quote from Ursula K. Le Guin’s novel, “Gifts,” is “nowhere . . . truer than Dupont Circle, where residents, from the comfort of their own bedrooms, often have no choice but to listen to a barrage of late night music emanating from local nightclubs and taverns,” according to the panel.

Like the views expressed by Dupont Circle’s Advisory Neighborhood Commission 2B, the board wrote in its order that Midtown “contributes to the noise problem experienced by the Dupont Circle community.” But that concern wasn’t enough to let the bar’s liquor license expire.

The board decided to renew the license with some conditions. Under the order, Midtown can’t open its roof to customers after 11 p.m. Mondays through Thursdays and after midnight on Fridays, Saturdays and Sundays.

“Licensed establishments in Dupont Circle and beyond must recognize that they have an obligation to ensure that late night music played on their property does not emanate hundreds of feet away from their premises and into nearby homes,” the panel wrote. “If licensed establishments fail to meet this obligation, then they risk ending up like Midtown, and losing important late night privileges.”