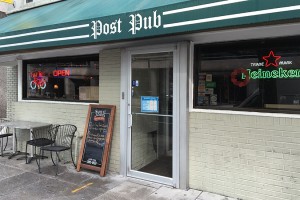 When the D.C. Department of Health ordered the Post Pub closed earlier this month, it noted that the dive bar at 1422 L St. NW had an “infestation of vermin.” But newly released DOH inspection reports shed light on exactly what the agency found.

In the initial routine inspection that closed the well-known bar and grill on Feb. 4, the agency says an official discovered rat droppings in the basement and two roaches stuck to traps in the kitchen. The DOH inspector also noted that some of the pub’s food was stored at “improper” temperatures and that there were “unclean” conditions, among other problems, throughout several food preparation and serving areas.

When an official returned for a follow-up inspection on Feb. 8, they reported seeing a live rat in the kitchen, prompting an automatic failure. One day later, a DOH official noted that all previous violations had been corrected, and the pub passed its follow-up inspection.

Post Pub owner Bob Beaulieu told us earlier this afternoon that it was the space next door, not his, that was the source of the pests.

“The owner of that building next door finally leased the place, so they came in and started ripping up the walls. It was full of trash,” he said. “They’re the ones with the problem. When they started construction, my problems started. . . . When the inspector said you have roaches, I said, I don’t think I do.”

And while he did acknowledge that the health inspector spotted a small rat in the kitchen, Beaulieu said it had ingested rat poison, making it “delirious” enough to wander into the kitchen during the daytime.

Still, he acknowledged that the business has periodically struggled with pest control in the past.

“The problem is, this building was built back in the 1860s. All these buildings have holes in them,” Beaulieu said. “We’ll go months and months without seeing anything . . . and then suddenly you’ve got to double up on your extermination services. It’s an uphill battle.”

Beaulieu added that the pest problem is city-wide, and “not as bad as what you see in New York.”

“You’ve even got some brand new buildings here that have problems,” Beaulieu said. “Everybody fights this problem.”

more stories
Previous
Alcohol Board Invokes Young Adult Novel in Dupont Bar Scolding
Next
What to Expect Around Town This Weekend (Feb. 20-21)