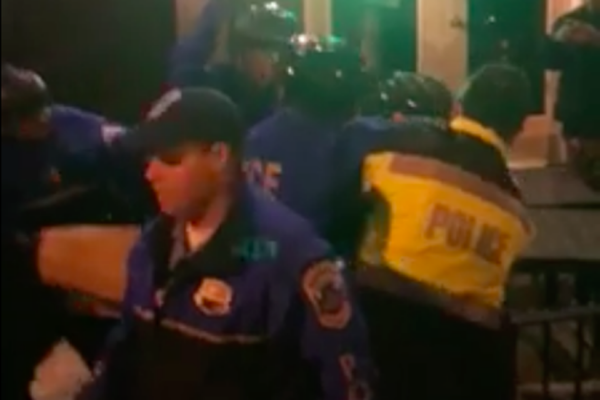 Police officers appeared to throw a punch and use a baton in the arrest of a man they say assaulted them in Adams Morgan early yesterday morning, a video shows.

Cops were called to the 2300 block of 18th Street NW about 3 a.m. Sunday for a report of a “disorderly individual” when they encountered 27-year-old Marquis Colbert, Metropolitan Police Department spokesman Dustin Sternbeck told Borderstan this morning.

Once on the scene, officers found a “visibly upset” Colbert who became “physically aggressive” toward officers, Sternbeck said.

The footage began with an officer appearing to hit the man with a baton repeatedly while a crowd of onlookers shouted in protest. At one point, an officer appeared to punch Colbert in the face, knocking off his hat, drawing boos from the crowd.

About a half-dozen officers then wrestled with him in an apparent attempt to get him on the ground and arrest him.

Several other people also are pulled to the ground and cuffed while someone yelled: “He didn’t do nothing,” and “That’s my brother.”

As police cleared the scene, the person filming the fight said: “They beat him for nothing.”

None of the officers involved in the incident have faced disciplinary action, Sternbeck said. But he said MPD is aware of the video.

“The incident remains under investigation,” he said.

Tanaisha Hines, 22, and Aaron Trogdon, 27, also were arrested in connection with the melee on similar charges as Colbert, Sternbeck said. Information on their lawyers wasn’t immediately available either.

Two cellphone robberies were reported on the 2300 block of 18th Street NW about 3 a.m. Sunday as well, according to police reports. But it wasn’t immediately clear if they were connected to the melee.