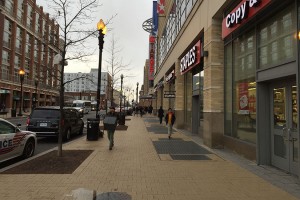 Police have arrested four teenagers who are suspected of flashing a knife and trying to rob two young men in a gang-related crime in Columbia Heights yesterday afternoon, according to authorities.

The victims were near DC USA when four people surrounded them, police said. The four individuals then showed a knife and ordered the victims to hand over all of their belongings.

Instead, the victims fled and contacted police.

Carlos Perez and Miguel Saravia-Torres, both 18, along with two juveniles who are 17 and 15, were apprehended in connection with the robbery attempt.

It wasn’t immediately clear if the attempted robbery was connected to a gang-related assault at the nearby Chipotle Mexican Grill last weekend.