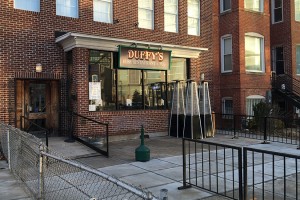 Is there a connection between Democratic presidential candidate Bernie Sanders and the chicken wings at Duffy’s Irish Pub?

Not at all, according to Duffy’s general manager Andy Duffy. But that didn’t stop him from buying a Bernie Sanders-related web domain last week.

“I was just sitting around having beers when I thought of it,” Duffy said. “I actually got the idea because of when Trump bought Jeb Bush’s domain.”

Visitors to the site berniesandersforpresident16.com won’t find a page supporting the socialist senator from Vermont. Instead, they’ll find a photo of the bar’s “best wings in D.C.” and a link to the Duffy’s homepage.

on this eve of Super Tuesday don't forget to take one more look at:https://t.co/GbCjZhvq2x . Your Vote is very important!

Why Sanders? Duffy said that, of all the presidential hopefuls, Sanders “was the only one that didn’t cover all his bases” by buying up potential domain names.

“I checked all of them, all of the main ones,” Duffy added. “It was like five bucks a month, so I bought it.”

So far, Duffy estimates about 500 people have clicked on the fake Sanders page.

The bar will further wade into national politics by holding a Super Tuesday watch party with drink specials and a political pub quiz.