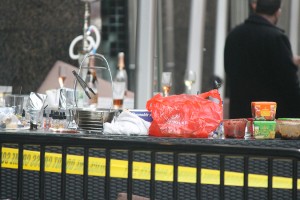 Police have apprehended a second man in connection with a stabbing death at a downtown nightclub earlier this year, authorities announced last night.

Devonta Johnson, a 27-year-old resident of of Northeast D.C., was arrested yesterday and charged with second-degree murder in the fatal stabbing of 29-year-old Robinson Pal at Barcode (1101 17th St. NW) on Jan. 31. Information on Johnson’s lawyer wasn’t immediately available.

In February, authorities also arrested 35-year-old Antoine Byrd and charged him with first-degree murder while armed.

The deadly attack happened during a large fight that involved an “unruly and aggressive crowd” inside the bar around 11:40 p.m. that night, police said. Investigators later found a bloody knife and several pieces of broken glass inside the business.

Another man was stabbed during the brawl, too. But he survived with minor injuries.

Police Chief Cathy Lanier ordered Barcode closed for 96 hours after the stabbing occurred. The bar has since reopened and is once again serving alcohol.