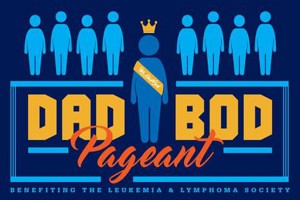 Men with “softly round” bodies are wanted to appear in an upcoming “dad bod pageant” scheduled to take place in Columbia Heights next month.

According to a Facebook post, the event is scheduled to take place on April 9 at Acre 121, a Southern food and barbecue restaurant located at 1400 Irving St. NW.

Event organizers say a dad bod is “a male body type that is best described as ‘softly round;’ a nice balance between working out and keeping a beer gut.” The trend, which spontaneously came into collective existence last spring, has since been both lauded and eviscerated in thinkpieces across the web.

Like the Miss America pageant, contestants will be judged on formalwear, swimwear and talent. The dapperest doughy man in the lot stands to win a three-month membership to VIDA Fitness, presumably to undo countless nights of beer and pizza.

Those attending the event are encouraged to donate $10 at the door to benefit the Leukemia and Lymphoma Society and to receive drink and food specials.

For more information and details on how to sign up to participate in the pageant, visit the event’s Facebook page.