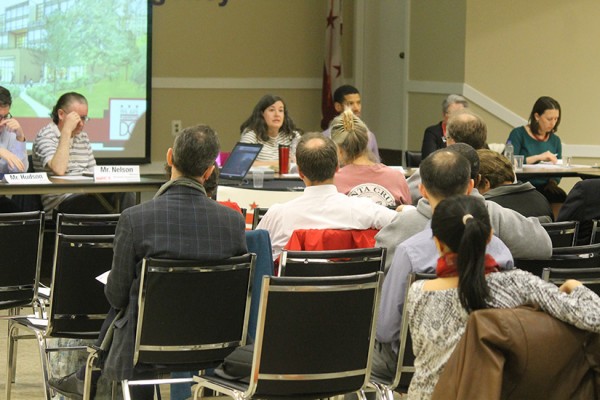 The plan to place up to 29 families in transitional housing at 2105-2107 10th St. NW costs too much. The process is not transparent. Neighbors and community leaders don’t have enough of a say.

Those were just some of the concerns shared by locals last night during a community engagement meeting at the D.C. Housing Finance Agency, located just off of U Street. During the meeting, Ward 1 D.C. Councilmember Brianne Nadeau, D.C. government officials and community leaders from U Street’s ANC 1B discussed the plan with about two dozen residents in attendance.

Government officials started the night by briefing locals on the current proposal.

The property at 10th and V streets NW, which is about two blocks west of the 9:30 Club, currently includes an unused church and a vacant lot. The mayor’s office is looking to use that land for apartment-style transitional housing. In addition to housing, the facility is slated to have playground and recreation space, a computer lab for residents, a common dining area and ongoing support services and programming for families.

Though most in attendance agreed that sheltering the homeless was a good idea in theory, some took issue over implementation of that plan.

The first round of questions came from members of the ANC’s economic development committee, who mostly directed their questions at J. Forest Hayes, associate director at D.C.’s Department of General Services.

Though some members’ questions revolved around the process of choosing a site and the shelter’s impact on local schools, others had concerns about the price of the project itself, estimated to be several million dollars above market value for the lot. Committee member Jerry Johnson, asked how the city is “justifying this excess in the purchase price and the rate at which you’re paying rent.”

“In seeking to acquire a site in Ward 1 that met with our [standards],” Hayes answered, “every site was at least 10 million dollars.”

Additionally, committee member Patrick Nelson worried that the city would change the design and scope of the project without also consulting the ANC.

“Is it because you’re afraid someone will tell them something you won’t like?” asked Nelson. “If you’re going to change that design . . . why would you not want to come back to the ANC?”

Hayes explained that the portion of the designs that the ANC already gave its blessing to would not be changed, and that the city had no intention of “reapproving something that you’ve already approved.”

Furthermore, he added, “if it requires ANC input, we will absolutely come back to you. But if it doesn’t, it will be the same plan that you approved and you can provide feedback.”

One resident who lives at The Lincoln condominium asked whether officials would consider making the shelter open to women and children only.

Jenna Grant Cevasco, a senior policy expert at the Office of the Deputy Mayor for Health and Human Services, responded that she wasn’t sure the city could legally make that distinction.

The resident added that he personally knows of 60 to 70 people, all in “grave opposition” to the proposed site. “There isn’t one person that objects because we don’t want a homeless shelter . . . on our street,” he continued. “What we fully object to though, is the process. There’s nothing democratic about closed government.”

“This plan has been in the process for a long time,” said Cevasco, who added that she thought the project had “resounding” community support.

“I think that if we had asked every ward in the city if [we could] put a short-term family housing site in your ward . . . everyone would say no,” Cevasco continued.

“I think that assumption is insulting,” responded the resident.

Cevasco replied: “In order for us to come up with a real site in every ward that would fit our needs. As soon as we . . . identified those sites, we came to the community and said, let’s start the conversation. This is a multi-year process, we want your feedback and your input.”

But not all of the residents in attendance dissented with the plan for housing. One man who lives at 15th and T streets NW said that he supports the idea for a shelter at 10th and V.

“I used to think, that’s the people in the ghetto,” said the man. “But I had things that happened to me that made me think, at the end of the day, we’re all people.”

“This would have been my son’s 28 birthday. He died almost a year ago,” said another woman in attendance while fighting back tears.

“He struggled with some very difficult problems. One of his needs was supportive housing,” she continued. “I will be at every meeting possible simply to remind you that he was a human being who deserved better.”

Perhaps the most heated moment of the night came when a man, seemingly angry that the period for public questions had ended, approached the city officials in attendance and loomed over them.

Meeting came to a head as resident, angry that he didn't get to ask a question, stands up to confront city officials pic.twitter.com/GZ9e5Bc9s9

“This is an outrage,” the man said. “And you’re a one-term councilmember,” he said to Nadeau.

The ANC ended its committee meeting by voting to “preserve its great weight” on further such issues, and with an assurance: There will be many more meetings on the topic.