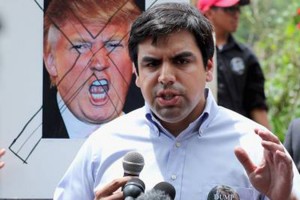 Sanchez, who politically identifies as a progressive, hopes members of both parties will join him in opposing Trump’s “cheap salesman tactics.”

“This is acknowledging that his actions and his remarks are disgusting that that we won’t put up with it anymore,” Sanchez said. “I’m hoping to reach the voters that walk into that convention who might consider Trump an inevitability.”

Though Sanchez isn’t sure how many people will show up, he expects at least two dozen people to join him during the rally.

“I’m hoping tomorrow that we have a really diverse group of all backgrounds,” Sanchez said. “Both parties standing up and rejecting the disgusting campaign Donald Trump is running.”