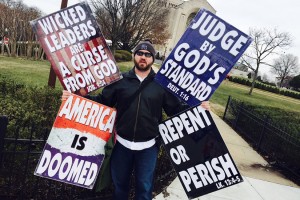 Members of the infamous Westboro Baptist Church have set their sights on two high schools in and around Pleasant Plains.

Why protest schools? “Some rich and famous folks got some schools named after them,” the church says in a statement, seemingly in reference to Duke Ellington. “The children thereof are entitled to some truth! Westboro Baptist Church is honored and duty bound to be of service.”

This isn’t the first time the church has targeted a school in the District. In 2014, church members picketed outside Wilson High School for holding a Pride Day celebration.

According to its online schedule, the church is in town to protest the upcoming AIPAC Convention, where Donald Trump, Hillary Clinton and Vice President Joe Biden are slated to speak at the Walter E. Washington Convention Center.

The group will also gather outside the Cuban Embassy (2630 16th St. NW) at 10:45 a.m. Monday to protest the country’s support of gay rights.