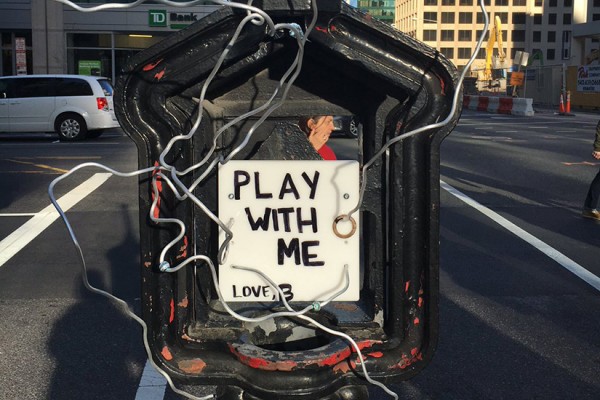 D.C. Council Questions Cost of Homeless Shelters — Members of the D.C. Council had some hard questions for Mayor Bowser during a a hearing yesterday. Chief among their concerns was the “eye-popping” cost of the shelters, mostly above market rate. [Washington Post]

Garnishes Gone Wild — From limes that look like frogs to mock oil cans, here are some of the crazy garnishes you’ll find atop the tiki drinks at Archipelago (1201 U St. NW). [Washington City Paper]

Public Art Pops Up Downtown — A new street art installation mysteriously appeared at the intersection of 15th and L streets NW overnight. The street art, the apparent work of an artist called “B,” is interactive and asks viewers to “play with me.” [Twitter / Craig Plazure]

Crooked Beat Might Leave Adams Morgan –Bill Daly, who owns Crooked Beat Records at 2116 18th St. NW, wrote in a post on his store’s Facebook page that he decided not to sign a long-term extension of his lease “out of concern for my health.” [Borderstan]