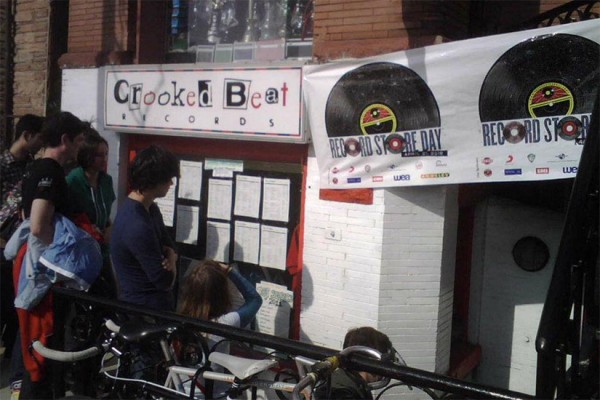 The owner of an Adams Morgan record store might move his shop due to the condition of its building, which he said last night is affecting his health.

Bill Daly, who owns Crooked Beat Records at 2116 18th St. NW, wrote in a post on his store’s Facebook page that he decided not to sign a long-term extension of his lease “out of concern for my health.”

He didn’t specify how the building was affecting his well-being and declined to identify the building’s problems. But he noted that the structure’s issues have “progressively gotten worse.”

“[E]ven with efforts to remedy the problems with this old building, the attempted repairs have not been sufficient and the issues continue to persist,” he wrote. “As a result, I am exploring options to leave this location and move to another space in the very near future.”

Daly wrote he would consider keeping Crooked Beat where it is if its building is “brought to a more satisfactory level.” But the store, which opened in 2004, might have to leave the Adams Morgan area and head to Virginia or another part of the District, he wrote.

“[T]he upshot is that it is our goal to stay in this part of DC if at all possible,” Daly wrote. “However, we are well aware of the higher rents in the District that are now making it very challenging and difficult for ‘Mom and Pop’ businesses to exist in many parts of this city.”

Daly didn’t identify his landlord, and it wasn’t immediately clear who owned the building.