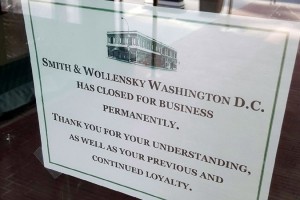 The Smith and Wollensky steakhouse on 19th Street NW has served its last filet mignon.

The national restaurant chain shuttered its location at 1112 19th St. NW on Saturday, an employee at the restaurant told us this afternoon.

A sign on the door of the eatery says it “has closed for business permanently.”

“Thank you for your understanding, as well as your previous and continued loyalty,” the sign reads.

Though it was unclear why exactly the steakhouse closed, we were told it was a “business decision” from company management.