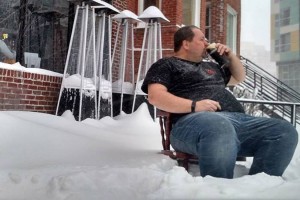 The neighborhood tavern’s general manager and onetime owner will leave the District after April 6 to bounce around Florida and Costa Rica, according a statement he posted to Facebook yesterday.

Duffy, who founded the bar at 2106 Vermont Ave. NW roughly eight years ago, closed up shop and left for Florida in 2014. But when the bar reopened under the ownership of Duffy’s regular Casey Callister roughly one year later, Duffy returned as general manager.

Though Duffy says he’s “so happy that Duffy’s is here to stay,” his heart apparently longs for sunny beaches and waves.

“Leaving is my idea and my decision . . . it just comes down to the fact that I miss that Florida beach and sun too much,” he writes. “It’s very satisfying that this time I’m able to leave on my own terms and also leave Duffy’s in such capable hands.”

So some news…I will be moving on from Duffy’s in a couple weeks to find new adventure.

I’m very excited and Happy that we were able to bring Duffy’s back and am grateful to Casey for the opportunity to make it happen and I will be back to visit often. I have thoroughly enjoyed these last six months. And I’m so happy that Duffy’s is here to stay. Leaving is my idea and my decision… it just comes down to the fact that I miss that Florida beach and sun too much. Its very satisfying that this time I’m able to leave on my own terms and also leave Duffy’s in such capable hands. I’m confident that Casey and Tom and a really amazing staff including Richard Julian and Alexandra Dunbar-Fernández will continue Duffy’s tradition of providing an awesome, down to earth neighborhood pub. All my recipes including the wing sauce will remain the same…so you don’t have to worry about losing those great wings 🙂

I am very grateful and really overwhelmed by the support all of you have given Duffy’s and myself.

As far as what I will do next…I’m not sure myself other than that I will spend a month in a hostel on a beach in Costa Rica in May because…well because why not? and then I will end up somewhere on the West coast of Florida likely bartending at a Tiki bar somewhere.

My Last day at Duffy’s will be Wednesday April 6th. Which is fitting as it also happens to be our Season Opening Nats Viewing Party. I plan to kick back and watch the game. If you’re around the hood that day stop by and have a beer and watch some baseball with me. Game time is 7 p.m.