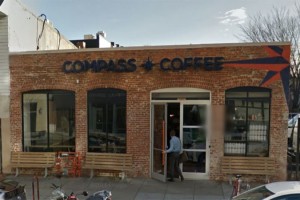 A knife-wielding man who tried to leave a Compass Coffee in Shaw with handfuls of money from the store’s cash register this weekend was thwarted by someone who tackled him to the ground and kept him there until police arrived, according to authorities.

The man entered the eatery with a knife in his hand and ordered employees to give him the money in the store’s cash register, police said. A worker soon after put the register on the shop’s counter.

The man then grabbed fistfuls of cash from the till and stuffed it in a backpack. But before he could depart, somebody tackled him and pinned him down, while another person called police.

So a guy pulled a knife at compass coffee in Shaw during a very busy Saturday afternoon. A customer jumped on him, took the knife, and …

….and held him down till the cops came. Wow. Hero.

Staff @CompassCoffeeDC are incredible under pressure. Professional in every sense of the word. Anyone here in the last hr knows what I mean.

Eric Stephens, 33, was arrested in connection with the robbery, according to authorities. Information on his lawyer wasn’t immediately available.

A Compass Coffee representative couldn’t immediately be reached for comment.

more stories
Previous
Logan Circle’s The Commodore Aims to Open Next Thursday
Next
Man Dragged From Car, Robbed After Giving Men a Lift to Park View