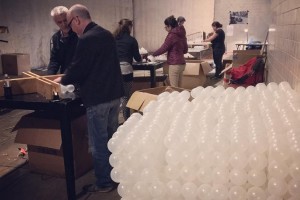 Dupont Underground’s first exhibit won’t build itself. In fact, the underground art space was kind of hoping you would.

The organization has put out the call for volunteers to help construct its very first exhibit, Raze/Raise. The exhibit, described by CityLab writer Kriston Capps as a “kind of live-action ‘Minecraft‘ installation” is composed of cubes made from plastic balls harvested from National Building Museum’s “The BEACH.”

“We need to build about 18 thousand cubes composed of 27 balls each,” reads an Eventbrite page the organization put up earlier this week. “It’s pretty simple really, we will be making an assembly line to transform balls into bricks as efficiently as possible. Our goal is to make about 1000 blocks in a day.”

Dupont Underground board member Philippa Hughes said that plenty of locals have signed up since the call for volunteers went up earlier this week.

“You’re standing on concrete, it’s kind of chilly down there,” she said. “But it is fun. It’s oddly mesmerizing. You’re just gluing these balls one after the other.”

Volunteers will spend about three hours at a time building the cubes, according to Hughes. Though the underground art space will have everything volunteers need to work, prospective helpers are asked to bring a glue gun, if they have one. And a playful demeanor.

“We’ve scheduled them for happy hour time, 5 to 8 p.m. each evening,” she said. “If you want to bring beverages, it’s meant to be social experience.”

Those interesting in helping out can sign up for a shift from now until April 24.