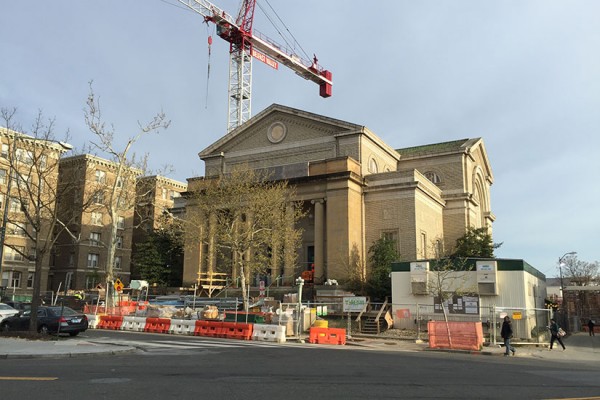 A labor union that has peppered Adams Morgan mailboxes with postcards critical of a forthcoming neighborhood hotel has received a tongue-lashing from a community leader, who called its campaign “highly inaccurate and highly disparaging” last night.

Billy Simpson, a member of Advisory Neighborhood Commission 1C, told locals at a community meeting he was “quite angered” by the mailings from Unite Here Local 25, which represents hotel workers in the D.C. area. The union is battling the owner of the future Line hotel at 1780 Columbia Road NW, Sydell Group, which won’t let workers unionize there.

The union’s most recent postcards stated that the hotel “seeks to bypass [the] full community process for [a] liquor license” and encouraged locals to attend yesterday’s meeting to “stand up and tell developers they need to #respectadamsmorgan.”

Simpson said the ANC has worked for several months with Sydell on the Line. The commission also has held public meetings about the Line and kept locals abreast of news about it through a neighborhood listserv, he said.

“For them to come and pretend like they’re acting as the representatives of the community’s interest is insulting to me personally,” Simpson said, noting Local 25 once was supportive of the Line when its members thought the hotel was pro-union.

Ian Elder, a Local 25 representative at the meeting, said the union didn’t intend to “denigrate the work of the ANC,” but has seen a lack of communication with the community in past hotel development in the District.

“We wanted to make sure there is a full process,” Elder said. “Since we’ve been burned, we want to make sure other people aren’t getting burned.”

The ANC was scheduled to vote on a settlement agreement over the Line’s liquor license application at last night’s meeting. But the vote now likely will occur in May, after further negotiations with Sydell.