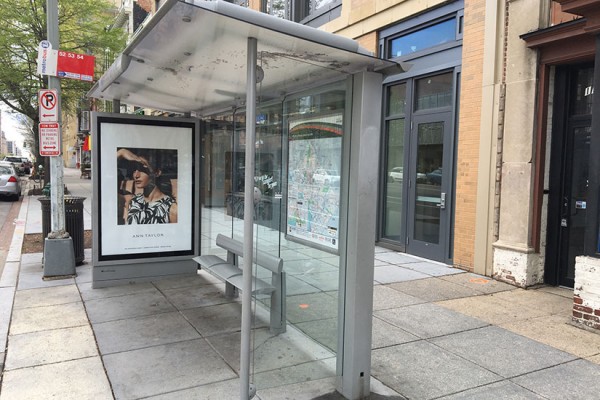 (Updated at 9:40 a.m. Friday) Community leaders in Logan Circle are urging the city to remove a shelter that covers a Metro bus stop on 14th Street NW.

The commissioners of ANC 2F voted last night to ask DDOT and WMATA to remove the shelter over the stop at 1336 14th St. NW, which is in front of the forthcoming Jinya Ramen Bar.

A group of community members and a representative from Jinya first came before the ANC’s Community Development Committee to request the removal of the covered bus shelter, according to commissioner Kevin Deeley.

“The shelter has attracted homeless residents and litter so there’s a renewed effort, with a new business coming in, to take the whole thing away,” Deeley said of the residents’ position.

The ANC in 2010 voted to remove the bus stop, a request that ultimately fizzled before the city, Deeley said. (As a side note, it’s not unheard of for WMATA to entirely remove a bus stop along a line. For example, the city will remove a stop near Howard University next Monday.)

Commissioner Pepin Tuma, who walks near the stop “every day,” said he was in favor of removing both the shelter and the stop.

“I’m very supportive of removing both the bus stop and the shelter for reasons that you addressed . . . the trash that goes there,” he said. “Also, the fact that it really does cut down on the use and enjoyment that residents and business could use for sidewalk cafes, things like that.”

Tuma added that he spent last Saturday “sitting outside of the 7-Eleven at the corner of Rhode Island and 14th [NW] watching how this bus stop worked.”

“There was exactly two people who got on in an hour and a half,” he said. “Both the [stops at the] block on the south and north had a large number of people.”

Tuma said he’d also favor a “one-two punch” of voting to remove first the shelter, then the entire stop.

“It would remove the blight that exists at that shelter,” Tuma said. “It would also open up that section of 14th Street south of Rhode Island Avenue which is . . . so confined right now. You’re blocking off two restaurant sidewalks.”

But not every member of the ANC was supportive of the idea. Newly appointed commissioner Maurice Dorsey said he talked with more than two dozen residents, all in opposition to removing the stop and the shelter.

“We have one neighbor who has chronic pain who said she looks forward to stopping there just to sit,” Dorsey said.

And ANC member Jim Lamare said he was apprehensive to vote on a resolution that would “target the homeless.”

“But the blight I understand,” Lamare added. “You might as well get rid of the 7-Eleven,” he said, seemingly in reference to the litter frequently found at the stop.

Ultimately, the commission voted 6-1-1 in favor of urging DDOT and WMATA to remove the sheltered portion of the bus stop. The matter now travels to the city agencies for consideration.