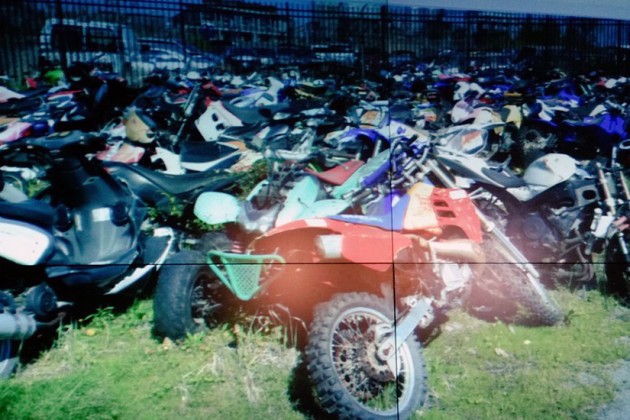 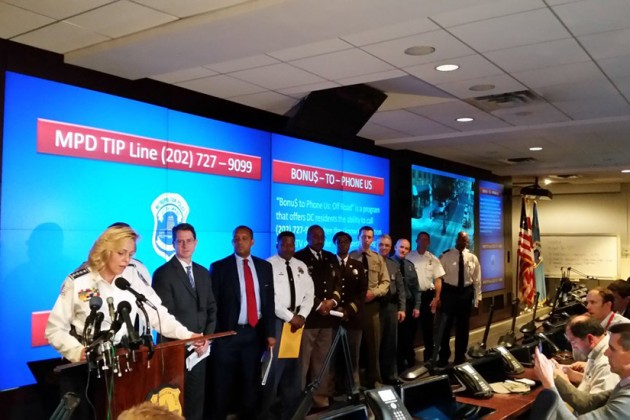 (Updated at 11:05 a.m.) When it comes to the illegal dirt bikes and ATVs zooming across city streets, D.C. Police Chief Cathy Lanier says, “enough is enough.”

Lanier and heads of other regional police departments held a press conference earlier today to address the trend of illegal dirt bikes and ATVs tearing down public streets in the District and the surrounding areas.

Crowds of bike and ATV riders have recently been spotted on 14th Street, U Street and Shaw in addition to countless other parts of the city and its suburbs.

In her address, Lanier vowed to “pursue relentlessly these illegal ATVs and dirt bikes and move forward with  their destruction.” The department has also released photos of 245 individual photos of ATV and dirt bike riders in an effort to identify and charge them.

“We have tourists and children and residents . . . that are being impacted by this and that’s just unacceptable,” Lanier said. “We are not going to put people’s lives at stake.”

Lanier said the department has already seized 400 vehicles and arrested 100 people in connection with its “latest operation,” but cautioned that further operations would not include risky police pursuits.

“It’s not going to involve single officers getting behind one or more of these vehicles and initiating a pursuit,” she said, citing putting officers and pedestrians at risk as the reason why.

More information on the campaign from a D.C. Police press release:

The Metropolitan Police Department’s (MPD’s) Criminal Intelligence has gathered close to 250 photos of individuals recklessly driving dirt bikes and all-terrain vehicles (ATVs) on the streets of the District of Columbia. These types of vehicles are dangerous to pedestrians and other motorists and are illegal to operate on DC’s streets.

The MPD is seeking the public’s assistance in identifying the operators of these vehicles as well as any locations where the vehicles are being stored. A reward of $250 is being offered for information on each person identified.

To share a tip, contact the Command Information Center at (202) 727-9099 with your information. The tip must lead to a successful confiscation and identification of the driver/operator of the vehicle.