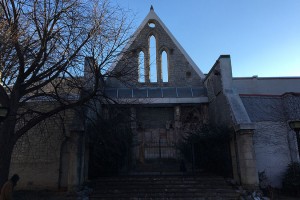 A man with an unleashed dog on the grounds of a Dupont Circle church tried to get his pet to go after a parish worker who took a photo of him last night, but left with the photographer’s cellphone instead, police said.

The robbery happened in front of St. Thomas’ Parish at 1772 Church St. NW about 7:30 p.m. Thursday. The church is about a block northeast of the Dupont Circle NW park.

The man had just let his dog off its leash on the parish’s property when he began to argue with the St. Thomas worker over having an unleashed canine, according to authorities. During the argument, the worker used a cellphone to snap a photo of the man, infuriating him.

The worker ran into the church’s vestibule soon after. The man then attempted to have his dog go after the worker, who started to shout for help.

The man eventually got a hold of the worker’s phone and threw it across a street. The worker then ran to a witness, while the man went to pick up the phone.

The man fled with the phone soon after.

Police tried to speak to the suspect at his home, according to authorities. But he wouldn’t come to his door.

It wasn’t immediately clear if anyone has been arrested in this incident.