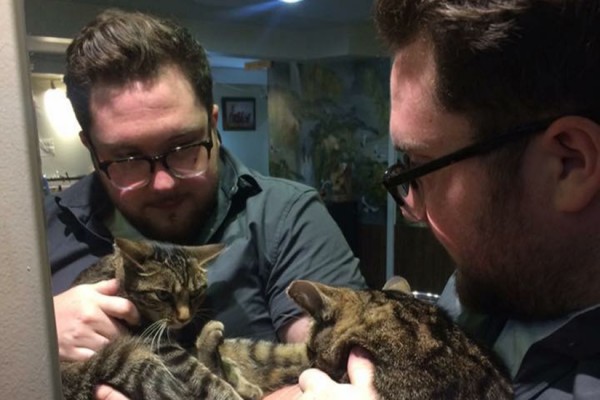 (Updated at 10:09 a.m.) I met Andrew after seeing an Underground Comedy show at The Big Hunt. He hadn’t performed that night, but he was there to support comedian friend Andrew Thimmesch and other fellow comedians. I conducted this interview after seeing him perform for the first time at the Bier Baron Tavern in Dupont Circle.

Borderstan: How are you feeling right now?

Andrew Cook: Feeling fine, feeling like I had a pretty good set.

You did! You brought the energy up.

Well, I do my very best. Yeah, that went well, it was later in the show, so getting people back into it is good.

How often do you perform?

Pretty regularly, to be honest. Knock on wood. I’m out most nights. Thursdays are really hard nights to get up because, as it happens right now, there’s just not a ton of Thursday night rooms. I think there are things in the works with people. I am doing a show, hopefully it’ll be regularly. It’ll be on Thursdays, definitely, at Suns Cinema, which is opening in Mount Pleasant.

Who’s going to be producing there?

The owners are Ryan Hunter Mitchell and David Cabrera. I think there’ll be other shows there. They’re going to do comedy and other stuff. I’m going to be doing a show there with Andrew Thimmesch called Parental Guidance and we’re going to watch G and PG movies with two comics. The first show’s [in April] and it’s going to be with Jamel Johnson and Pearl Rose Hood.

He is and I got him. He’s leaving at the end of April. He’s here for 202 [Comedy Festival] and a few other shows. His calendar before he leaves is crazy and awesome and they’re all going to be fantastic shows. But we got him before he leaves, for the show we’re going to do [a kids’ movie from the 90s].

Oh, I don’t think I’ve ever seen that. Do you show the movie? How does it work

We comment on the movie, yeah. There will be tickets sold. Don’t mention the movie. We’re just still trying to figure out how to promote it. It’s going to be good; we’re very excited about it.

Where do you perform Sunday nights?

I want to go to a Wonderland show. I’ve never been to that one. I was actually at a show last night produced by Last Resort Comedy.

At Shenanigan’s? I do that with some frequency. I like doing that room, but I’m at Big Hunt a lot. Again, knock on wood.

Big Hunt’s pretty good. The weekend Big Hunt shows are tough to beat as far as “in the city.” It’s a really cool venue. It gives in to this really deep-seeded idea about comedy – it’s a basement, it’s sort of dark, it’s all devil shit. It’s a place that you’d either laugh in or be terrified of, which is a good vibe to do comedy in because that’s where it tends to come from for a lot of people. So, those weekend shows are tough to beat, but there’s also [Arlington Cinema and] Drafthouse, which is in Virginia. Andy Kline and Randolph Terrance run that and that’s an awesome show. They pack out the room every Saturday night.

I’ve also never gone to that show. There are a lot of shows I’ve not gone to.

There are a lot of shows. That’s the thing. I’m out most nights and I’m very new, comparably to most of the comics on the scene.

How long have you been doing it?

A little over a year right now.

Ok. Who are some of your favorites of the local scene?

When I first even saw the local scene, I remember Michael Foody blowing my mind, David Tveite. Seeing Andrew Bucket for the first time was — as seeing Andrew Bucket always is — crazy and weird, like that’s cool that you can do that. And I knew him, so it made it real, seeing his set. That’s always cool.

You know, a lot of people bounce into comedy and they don’t know anybody. They’re just sort of comics; they want to be one, but they don’t know any. They got to the mic because they, to some level, fantasized about the comedy lifestyle and being a comedian. At its best, it is a non-gendered good ol’ boys club. It’s that vibe, like we all know what’s up. If you don’t know anybody, the time it takes to peel away the mythical way you view those people can be a harsh learning curve. But if you know and can get to know people, my experience was that people were super friendly. I don’t know if I said the right things at the right time or what, but people were really nice.

And seeing Andrew Bucket early on, knowing him offstage and seeing him do it, it became real in a way that it never had been. I’m certainly out every night. This is the only thing I want to do. I don’t have other aspirations or a back-up plan.

more stories
Previous
How to Dress for Your Illegal ATV or Dirt Bike Ride in 17 Photos
Next
Dispute Over Unleashed Dog at Dupont’s St. Thomas Ends in Robbery