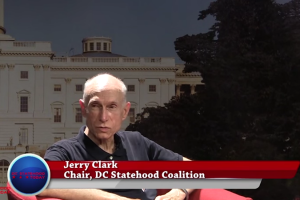 District residents are mourning the loss of a prolific D.C. Statehood activist who died Friday.

Jerry Clark, founder of the D.C. Statehood Coalition, “died peacefully in his sleep at Virginia Hospital Center” at the age of  74, according to fellow advocacy group New Columbia Vision. Clark was reportedly battling health problems related to a fall he suffered in January.

Throughout his long career, Clark “was active in Washington politics, gay and lesbian rights and had long led the effort to achieve statehood for the District of Columbia,” according to his niece, Aron Rider.

“Ward 1 lost an incredible leader last night,” D.C. Councilmember Brianne Nadeau wrote on Faebook Saturday. “I will seek to honor Jerry in all that I do as Councilmember. May his memory be a blessing to us all.”

Clark was “a friend,” said Ward 6 Councilmember Charles Allen. “And a fierce voice for what’s right and what’s needed – not just in DC, but our country. I will miss him.”

Ward 5 Councilmember Kenyan McDuffie echoed the sentiment by tweeting that Clark “fought the good fight, and the District is better because of your efforts,” and Councilmember at-large Elissa Silverman said that Clark’s “optimism about statehood & politics improving lives of people helped put me on my unpredictable path.”

Other locals took to Twitter to remember Clark after hearing the news of Clark’s passing:

Deeply saddened by the news that #DCStatehood Champion & Activist Jerry N. Clark has passed away at the age of 74.https://t.co/4U7nxT46LG

In a town full of assholes, Jerry was a nice guy. Not to be underestimated. He will be missed. https://t.co/gYZ02SoIE3

I got to know Jerry Clark though the #draftweaver movement. Need more people like Jerry. RIP.