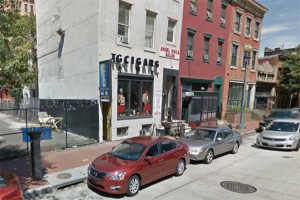 A man hit two people, threw an ashtray at one of them, threatened that individual with a pair of metal knuckles and retrieved a picture of himself over the course of three visits to a Shaw cigar bar last week, police said.

The attacker made his trips to TG Cigar Lounge at 1118 9th St. NW between 9 and 11 p.m. Thursday, according to a police report Borderstan obtained today.

The man was arguing with someone in the bar when he was told to leave, according to authorities. The argument then escalated, becoming physically violent.

Customers tried to break up the fight, and someone attempted to remove the man from the lounge. But the man hit that individual and hurled a metal ashtray at the person he was arguing with at the beginning.

He departed soon after. But he wasn’t done with TG’s yet.

The man returned with a pair of metal knuckles, telling the target of his argument that he wanted to “go outside” with the individual and would “kill” that person, according to authorities.

The individual declined the invitation, infuriating the man. He then used his hand without the metal knuckles to punch the person, causing the individual to knock into a display case.

The man left again soon after. But he wasn’t gone for long.

He came back one last time to remove a picture of himself before disappearing for good.