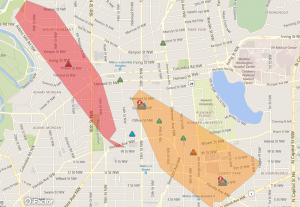 (Updated at 11:48 a.m.) Thousands of homes and businesses were without power in parts of Columbia Heights, on U Street, near Howard University and elsewhere nearby earlier today, according to utility company Pepco.

Power was restored to most of the area around 11:26 a.m., according to the Pepco outage map.

The power went out in parts of Columbia Heights, on U Street, in LeDroit Park and in other surrounding neighborhoods at 10:52 a.m., according to Pepco.

A Pepco spokesman said the outage was caused by “a problem at one of the substations,” and added that the company is currently investigating the matter.