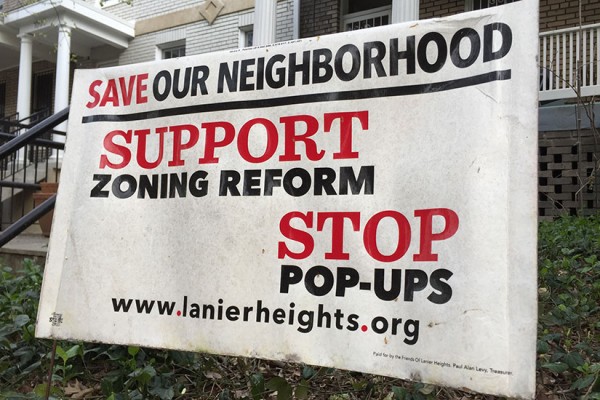 Opponents of new pop-up homes in Lanier Heights are one step away from making it harder for developers to build those houses in the neighborhood.

The D.C. Zoning Commission last night unanimously endorsed a petition that generally would limit residential construction in Lanier Heights to one- or two-unit homes. The petition, brought by Lanier Heights residents and Advisory Neighborhood Commission 1C, which represents the neighborhood, is set to receive a final vote before the zoning panel next month, after a 30-day public review period.

“I must say that I think the ANC made an excellent case,” Zoning Commission vice chairwoman Marcie Cohen said yesterday. “I commend them for their clarity and completeness in their presentation.”

Since 2014, the ANC has pushed the Zoning Commission to restrict pop-up houses in Lanier Heights by making the area an R-4 zoning district that favors single-family homes, instead of leaving it as an R-5-B zoning district that generally allows larger residential buildings. In testimony before the Zoning Commission last month, ANC Commissioner Billy Simpson emphasized that the neighborhood is a “special place” due to its housing diversity, which the ANC is trying to maintain.

Ted Guthrie, the ANC’s chairman, told Borderstan today he was “very pleased” to hear the Zoning Commission’s decision, which he said a “substantial majority of Lanier Heights residents” support.

“It’s taken a long time and a lot of hard work,” he said. “My thanks to all who participated in the process.”

But not all of Guthrie’s neighbors backed a zoning change.

Ron Baker, who leads the Neighbors Against Downzoning group, has fought against changing the zoning district for Lanier Heights, saying the neighborhood shouldn’t restrict its housing choices.