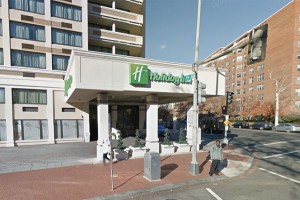 Men with guns stole $30,000 from a man who told police he planned to use the money to buy a car at a hotel in Logan Circle last night, according to authorities.

The armed robbery happened inside the Holiday Inn at 1501 Rhode Island Ave. NW about 10:30 p.m. Tuesday.

The victim was meeting with three men in his hotel room about purchasing the vehicle when they forced him into his bathroom at gunpoint, police said.

The men then took the $30,000, along with the victim’s backpack and iPhone, and fled.

Authorities haven’t released detailed descriptions of the suspects. But police noted that one of them was wearing a blue suit and two of them had dreadlocks.