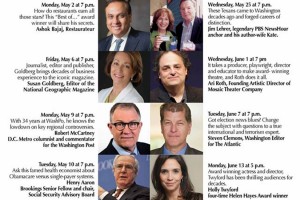 “What Washington icons would you like to share dinner with in a small-group, private Dupont Circle home this summer?” a press release sent out by Dupont Circle Village reads.

Tickets are $75. Due to the small number of tickets, some dinners have already sold out.

More information about the series from the organization’s full press release:

What Washington icons would you like to share dinner with in a small-group, private Dupont Circle home this summer between May 2nd and September 19th? How about author-writer Kate Lehrer and her journalist husband, Jim Lehrer; or four-time Helen Hayes Award winner Holly Twyford; or National Geographic Magazine Editor Susan Goldberg? What about Washington Post Metro Columnist/Commentator Robert McCartney; or New York Times Washington Bureau Chief Elisabeth Bumiller; or The Atlantic Washington Editor Steven Clemons?

Sign up online to attend one or more of these 12 dinners before 5 p.m. on Thursday, April 14th: http://dupontcirclevillage.net.Tickets are $75 each; $50 is tax-deductible. You can beat the tax collector with your tax-exempt purchase now before April 15th. Remaining tickets will be available for attendees at the sold-out Dupont Circle Village Gala at the Woman’s Democratic Club on Sunday, April 17th. Unsold tickets will go online again at 1 p.m. on Monday, April 18th.