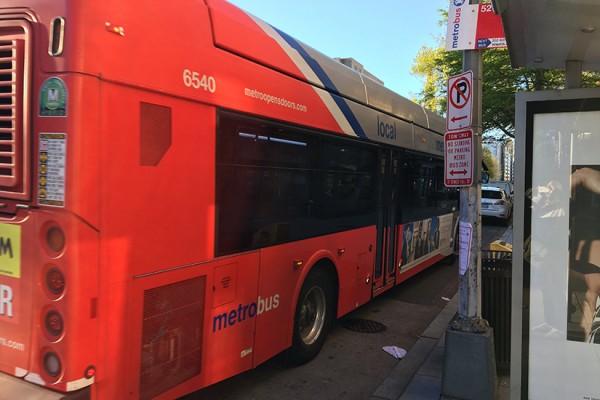 “The latest WMATA study that addresses placement of bus stops, the recommended number of stops per mile is four to five. Here we have four stops in less than one third of a mile, three of which have bus shelters,” the residents wrote in a letter to the ANC’s subcommittee.

“From an operational point of view, a bus stop consolidation effort that provides running time and cost savings to a transit agency should be sought out, as long as the convenience to the public rider isn’t not greatly jeopardized,” the residents continued in their letter. “Ridership wouldn’t suffer, nor will riders be asked to shoulder an undue burden by walking an average of 500 feet to another sheltered bus stop.

But some bus riders who use the stop often, like Brenda Gonzalez, say removing the bus shelter or the stop itself would be a disservice to the community.

“It’s definitely important to my morning commute,” Gonzalez said while waiting for the 52 bus this morning. “I see the same people here at this stop every morning. Sometimes it’ll be two or three. Sometimes it’s six or seven. It can be a good amount.”

Despite her concern, Gonzalez also admitted that losing the shelter or the stop itself wouldn’t make her morning commute impossible.

Of the 17 bus riders waiting at the stop between 7:30 and 9:30 a.m. today, none said they supported removing the shelter. But some admitted they didn’t always use it, either.

One rider, who didn’t want to provide their name, said they were apprehensive to stand under the shelter because of a group of people who frequently smoked there. Another rider who didn’t want to be named said they were unhappy with the amount of litter often found at the stop (though it’s important to note the stop was clean when we visited earlier today). Issues with the stop aside, both riders said they thought removing the shelter above it would not be a good decision.

ANC 2F Commissioner Pepin Tuma, who represents the single member district that includes that section of 14th Street NW, said that it’s “understandable that people may be more reluctant” before they know all the facts.

Tuma said his ANC voted to remove the shelter — and eventually the stop itself — because doing so could open up a valuable stretch of 14th Street NW to businesses, pedestrians and drivers.

Removing the shelter and the stop, Tuma explained, would free up several parking spaces along 14th Street NW and provide room for pedestrians and businesses who want to use the sidewalk.

And Tuma added the bus lane in front of the stop is often blocked by cars or construction equipment, which “breaks every purpose of having bus lanes.”

“It’s just not a smart place for a bus stop,” Tuma said. “It’s really not an inconvenience to go three quarters of a block north and south, and I say that as someone who rides the bus regularly.”

“This is a bus stop that certainly has value to a very small number of people, but neither meets with WMATA’s recommendations nor is it necessary for ease of commuting,” Tuma added.

Tuma also said he’d also like to move the bus shelter to the stop across the street as opposed to removing it entirely.

“The smartest thing is moving the bus shelter to the other side of 14th Street to provide a shelter . . .  at N Street Village and Luther Place [Memorial Church,]” Tuma explained.

Tuma said his ANC isn’t alone in the decision, either. He said he’d personally talked to between 50 and 60 residents, all in support of moving the shelter and nixing the stop.

“I think when they understand the locations of the other bus stops, the implications of additional parking and the benefit to the neighborhood and the benefit of the businesses, then they are uniformly in favor,” Tuma said.

To doubters of the plan, Tuma had this to say: “Come and talk to me.” He encourages all who disagree with the push to nix the shelter to email him.