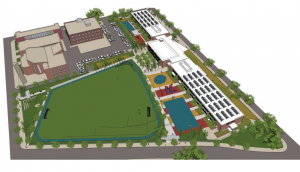 The renovations will include “infrastructure work, a transformation of interior spaces, and the addition of elevators to increase second floor accessibility” over two phases of work, said DCPS Press Secretary Michelle Lerner.

During the first phase, which is due to be completed in August, crews will work on the school’s infrastructure, reconstruct the stairs and ramp along S St. NW and fill in sinkholes in the school’s field, among other changes.

The more extensive work will take place next summer, according to DCPS. During that phase, workers will renovate and modernize the school’s classrooms, build a new library-media center, and perform upgrades to the building’s interior entrance and welcome center. The work will also include new bathrooms, windows, elevators throughout the school.

The school is slated to get new playgrounds and athletic fields, “though this work may continue into Fall 2017,” Lerner added.

All told, the project is expected to cost $27.86 million, with $24 million allocated to the building itself and $3.86 million going toward the school’s fields and playground.

“The renovation will completely transform the way Garrison looks inside and out, but unfortunately our budget is not sufficient to renovate all of the common areas of the building,” wrote the PTO. “It does not cover the hallway connection needed between the two wings of the second floor, and it will not give us the updated multipurpose room or kitchen.”

Lerner confirmed that the modernization project will not include a hallway connection between the two school wings, “which is not necessary for ADA compliance.” She added that “kitchen equipment will be listed as an alternate item in the bid package and will be replaced if sufficient funding remains after the rest of project scope is purchased.”

The District expects to complete 98 school modernization projects between 2017 and 2022.