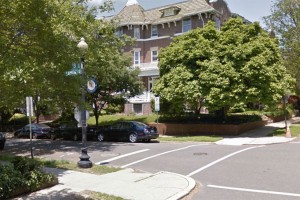 The armed robbery happened on 1800 block of Lamont Street NW about 7 p.m. The area is about a block west of Lamont Park at Lamont and Mount Pleasant streets NW.

The victim was in the area when a boy came up to her from behind, according to authorities. The young man then placed his arm around her neck and put a knife to her abdomen.

He ordered her to hand over her cellphone and headphones soon after. The boy then took them from her and started to run away.

But the woman began to scream, drawing the attention of two passersby, police said.

The bystanders then chased after a young man who was running and dropping items. They eventually caught up to the boy, holding him in place until police arrived.

The suspect didn’t make it easy for police to arrest him, however.

An officer sustained injuries to his left shoulder and elbow while apprehending the boy, according to authorities. The young man also tried to bite the cop on his left arm.

According to police reports Borderstan obtained today, other recent crime in our coverage area includes: