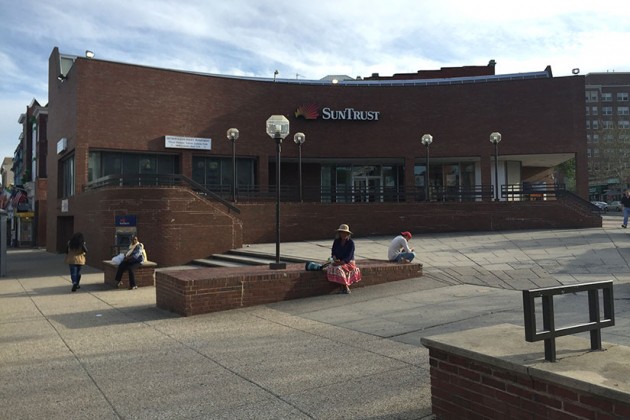 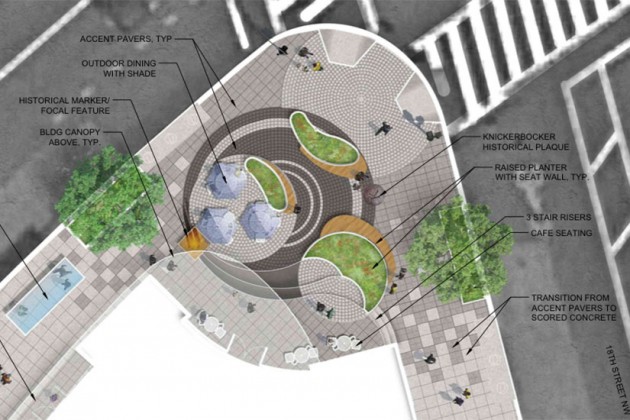 Adams Morgan community leaders last night moved one step closer to officially registering their opposition to a property developer’s proposal to revamp a large plaza in the heart of the neighborhood.

At a heated meeting filled with cheers and even some singing, an Advisory Neighborhood Commission 1C committee backed a recommendation to formally notify D.C. officials of its resistance to PN Hoffman’s plans to build on the SunTrust plaza and the rest of 1800 Columbia Road NW.

The panel’s non-binding guidance argues that the D.C. government-backed “Adams Morgan Vision Framework” doesn’t support the developer’s plan for the plaza as part of a new mixed-use development. The framework calls for the privately owned plaza to serve as a “functional community gathering space” to host events, according to the committee’s recommendation.

Panel chairman JonMarc Buffa said he received “hundreds of emails” with concerns about PN Hoffman’s proposal before he voted for the recommendation.

“I’m doing my best to convey what I believe is the consensus of my constituents,” he said.

Many of the dozens of people crammed into a room at Mary’s Center in Adams Morgan appeared to stand in support of Buffa and his committee.

At one point, a man sang lines from “Taxes on the Farmer Feeds Us All” as locals and farmers worried about the future of the plaza’s market, which runs Saturdays from June to December.

Denis James, president of the Kalorama Citizens Association, told PN Hoffman representatives at the meeting that they are “destroying our town square.”

“The building is way too big for the site,” he said, drawing applause.

Earlier this month, PN Hoffman released updated renderings of its development, creating a larger plaza than it initially planned.

The outdoor area would have large planters, benches, chairs and a cafe space for a tenant. But it would have less room for a farmers market, which the developer has said it could move to the larger BB&T Bank plaza across the street.

“I think what we’re trying to do is create a plaza that’s a lot more inviting and more useful than the existing SunTrust plaza,” said Shawn Seaman, PN Hoffman’s senior vice president for acquisitions and development.

Some residents at the meeting agreed with the developer’s plan. Local Lois Thibault noted that the plaza is “remarkably unused.”

“It is way too sunny for this climate, and it doesn’t work well for almost any purpose except for sleeping something off,” she said.

The full ANC is expected to vote on the committee’s recommendation on May 4.