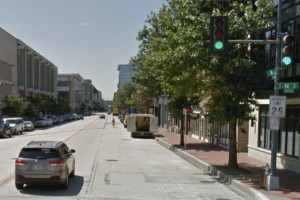 A thief gave a ride to a man and robbed him at gunpoint early this morning after meeting him at a party in Shaw, police said.

The man had left the gathering at Vita Lounge (1318 9th St. NW) when a man he met there drove up to him in a dark-colored Toyota or Ford, according to authorities. The victim then got into the man’s vehicle.

But they didn’t go far.

The driver pulled his car over about a block away from the bar. He then flashed a handgun, directing the victim to empty his pockets. The driver eventually ordered the victim out of the car after getting a pair of keys from him.

The robber drove away not long after.

A man also robbed another man at gunpoint in Columbia Heights earlier this week, according to a police report Borderstan obtained today.

The armed robbery occurred on the 1400 block of Fairmont Street NW about 10:15 p.m. Tuesday. The area is about two blocks northeast of Meridian Hill Park.

The victim was in the area when a man near him flashed a handgun, according to authorities. The man with the gun then took the victim’s Air Jordan shoes, iPhone and other belongings before the victim ran away.

Police have haven’t released a detailed description of the suspect.