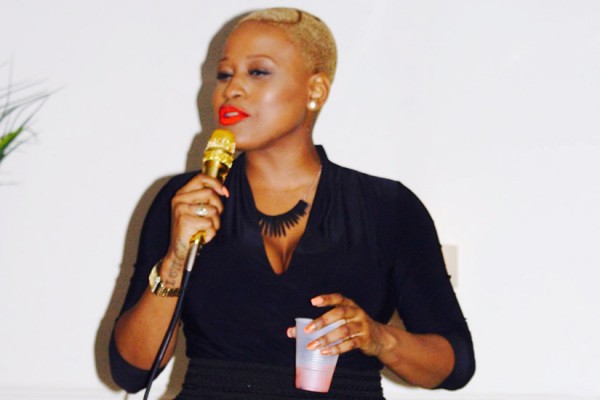 When you see Paris on stage performing stand-up, she’s so effortlessly comfortable, it seems like she’s been doing it forever. Or maybe it’s just a confidence that she has about her regardless of what she’s doing. It’s just her.

I saw Paris perform a couple of weeks ago at Shenanigan’s and was immediately drawn to her charisma. The next time I saw her was when she hosted a show at Amsterdam Lounge. It was after this show that we sat around and chatted about how she got started with comedy and what balls had to with it.

(Side note: Sashay made headlines last October when she told the harrowing tale of being harassed, then attacked by a group of men downtown.)

Borderstan: How long have you been doing comedy?

How did you get started?

I got an answer for you, but it’s just deep. I went to college for two years because that’s what they wanted me to do. They were like oh, you’re the first person in the family going away to college. Good.

And you feel good about yourself, but if I f-ck up, then I let the family down and I let the family down. I came home and I said that I need something to do ’cause this is not good. Your family wants you to be like the college counselor. I can’t because I’m home. It’s just different. It is not the same.

Where’d you go to school for two years?

So, I came home and I needed something to do. I went to a hotel party with all my friends and I just told jokes the entire night. I could not stop playing, like that whole night I think I was on fire for six hours. They were like, you need to do comedy, and I said, no, I don’t, but I need to do this.

There was probably 40 white people, no black people. I got there. I was nervous. I hid in the bathroom. I stayed in the bathroom. It was like, Paris, they’re calling you next. My mother came there; she said, you’re going on next, you need to come out. And she prayed for me. I was like, I’m not coming out. There’s no way.

Your mother was there?

My mother, my sister, my other sister, my cousin. People that were close to me. I’m like, I’m not telling jokes. I sat in the crowd watching two people and they didn’t do well, like they didn’t even give me motivation to do it, so I hid in the bathroom. The host came out, saying Paris Sashay and I was like, this is me, but I didn’t want to agree that it was me.

I did 13 minutes and it was wonderful. It was all white people and I thought if I can do this, I can do anything.

Is there a difference between a white audience and a black audience?

I feel like in white rooms, when you hear a black comic with a story, you’re so entertained because you haven’t heard anything like it all night. I honestly love doing white crowds and a lot of people are like, how did you get to do it? Because a lot of black comics can’t do white crowds. I do it because I do crowd work. I make the crowd feel comfortable, like, it’s not about me, it’s about you.

Like, I know this is funny, but it’s about making you believe that it’s funny. So I did that crowd that night, 40 white people, no black people at all, and I felt a feeling that I’ve never felt before. I didn’t even want to go to sleep. I didn’t even want to let the feeling die. It was a super high. Not coke, not molly, not weed, comedy. After that, I did a show each night.

Paris performs all around town, including Monday nights at Shenanigan’s in Adams Morgan. For info on her upcoming shows, follow her on Twitter.

This interview has been slightly edited for clarity and length. Photo by Lady J’s Reflectionz and courtesy of Paris Sashay.