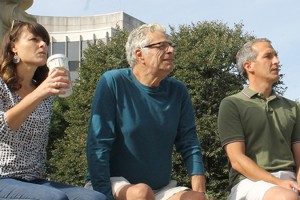 Locals looking to say goodbye to Dupont community leader Mike Feldstein will have the chance to do so this Sunday.

Feldstein, a longtime ANC 2B commissioner who died roughly two weeks ago, will be remembered by friends and family at the Dupont Circle Hotel (1500 New Hampshire Ave. NW) this Sunday at 11 a.m. All are welcome to attend and a light reception will follow the service.

Feldstein joined the neighborhood commission in 2009, according to the Washington Blade. He previously volunteered for the Peace Corps and worked for the U.S. Agency for International Development and as a policy planning staff member for the U.S. Department of State. He was also a former board member of the International Gay and Lesbian Human Rights Commission, and served as founder and president of Dupont Festival, a group that organizes events in and around Dupont Circle.

In an official statement released April 15, Feldstein’s fellow commissioners called him a “true leader who constantly pushed for progress and inspired those around him with his vision, kindness and tenacity.”

It is with great sadness that we acknowledge the passing of Commissioner Michael Feldstein, who has served the residents and businesses of district 2B-01 on the Dupont Circle Advisory Neighborhood Commission for almost eight years. Mike passed away in his home on April 13th following an extended illness.

Mike was a true leader who constantly pushed for progress and inspired those around him with his vision, kindness and tenacity. Throughout his career in international development and aid, and then in his work for the neighborhood, he was a strong advocate for the most vulnerable among us, especially for those who suffer quietly or without the ability to ask for help. In Dupont, he fiercely championed the beautification and utilization of our public spaces to the benefit of all of us.

Those who knew Mike know that he would never want anyone to make a fuss about him, but he did say that if friends were insistent they could honor his memory through a donation to the Dupont Circle Village, whose members rallied around Mike in his last days and weeks. Mike’s family, which includes so many neighbors, community members and friends, are planning a ceremony in celebration of his life the weekend of April 30. Please check back here for more details.

His family in Dupont Circle misses him dearly.