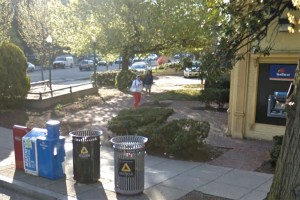 A thief robbed a man who passed out on a Dupont sidewalk early yesterday morning after having a little too much to drink at a nearby nightclub, police said.

The robbery happened outside the SunTrust Bank at 1369 Connecticut Ave. NW about 4:30 a.m. Monday. The bank’s building, which also houses the Metropolitan Police Department’s Lesbian, Gay, Bisexual and Transgender Liaison Unit, is just southeast of the Dupont Circle traffic circle.

The victim was waiting for someone to pick him up in a car when he fell asleep on the brick sidewalk area next to the bank, according to authorities. The man had just left an unidentified club where he was “over indulging” on alcoholic beverages, police said.

While he napped, somebody took his iPhone, cash and other belongings from his pockets, according to surveillance video seen by police.