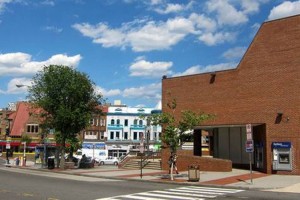 The battle over the future of a large plaza in the heart of Adams Morgan has spawned a request to stop what some locals are calling a “Bethesda-like apartment complex.”

The “Save Our Plaza in Adams Morgan” petition, which went online Saturday, calls for the SunTrust plaza at 1800 Columbia Road NW to be “improved, yet remain a central community gathering space and plaza serving the residents of Adams Morgan.” But developer PN Hoffman’s plan to create a smaller plaza with benches, chairs and cafe space doesn’t cut it, according to some residents.

“We are opposed to the current PN Hoffman plan to build a 80+ foot tall Bethesda-like apartment complex that would subsume the public plaza we use and enjoy now,” the petition says. “We support city intervention that will protect our plaza from encroachment by any proposed project at this central site in our neighborhood.”

A group called, “Adams Morgan for Reasonable Development,” launched the petition a day after PN Hoffman chief executive officer Monty Hoffman defended his company’s plan for the privately owned plaza and the rest of the SunTrust property.

Last month, an Advisory Neighborhood Commission 1C committee backed a recommendation to formally notify D.C. officials of its resistance to PN Hoffman’s latest proposal to construct a mixed-use building that would take up much of the SunTrust space. The full ANC is expected to vote on the panel’s recommendation Wednesday.