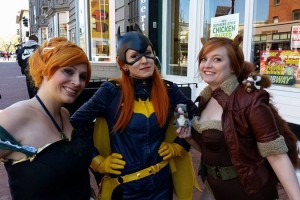 Fans of Marvel’s “Civil War” will be able to “join the fray” during a planned gathering in Dupont Circle this weekend.

“Repping #TeamCap? Standing with #TeamIronMan? Just want everyone to stop fighting and be buddies again???” reads a Facebook event post. “Well don your best superhero costume/clothes and join us near the fountain in the middle of Dupont Circle for a massive meeting of Civil War fans”

Though Marvel’s “Civil War” centers on a violent rift among the Avengers, Fantom Comics manager Esther Kim said Saturday’s event will be “less a fight and more just a fun photo op.” The event will include a professional photographer and raffles, she said.

Fantom Comics will also give “Star Wars” enthusiasts the chance to meet a real live BB-8 droid in celebration of May the Fourth tomorrow starting at noon.