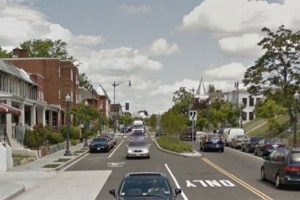 One teenage boy was hit with a chain and another one almost was stabbed in a gang-related robbery about three blocks east of the Columbia Heights Metro station yesterday afternoon, police said.

The violent crime happened on the 3100 block of Sherman Avenue NW about 3:30 p.m.

The teens were in the area with their bicycles when two people came up to them, according to authorities. One of the individuals then whipped one of the boys with a chain before grabbing the victim’s bike. The attacker’s companion followed up by trying to stab the other teen with a knife before taking his bike.

The assailants fled soon after with their new rides.

The video appears to show a man touching the butt of a woman walking down a sidewalk before he runs away.

Crime Solvers of Washington, DC currently offers a reward of up to $1,000 to anyone who provides information that leads to the arrest and indictment of the person or persons responsible for a crime committed in the District of Columbia. Your assistance is appreciated by your community. CCN #16-065-178.