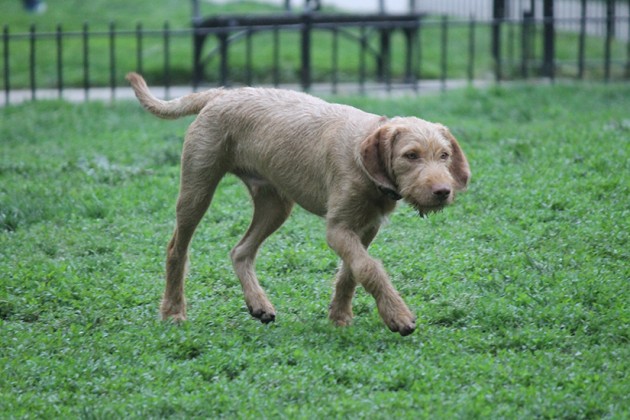 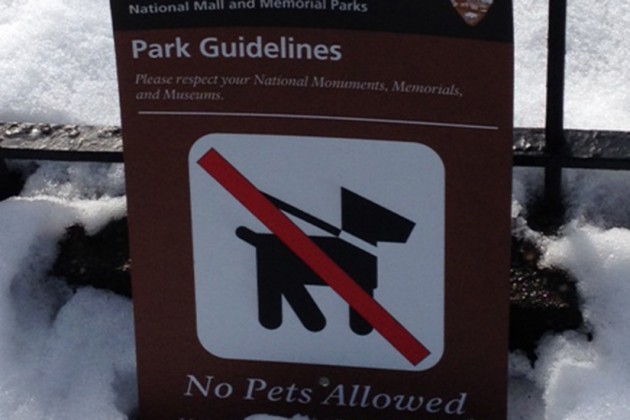 (Updated at 4:22 p.m.) Some local dog owners are butting heads with the National Park Service and other members of the community over where their dogs should be allowed to frolic in Logan Circle park.

According to the National Park Service, leashed dogs are allowed to roam the park but are not allowed in the inner circle that surrounds the statue of Major General John A. Logan. Dog owners who disobey that rule could be cited, said to NPS spokeswoman Sgt. Anna Rose.

Humans, however, are allowed in the inner circle. Logan Circle’s ANC 2F discussed the issue during its monthly general meeting last week.

“There’s dogs running around the statue, kids climbing on it. All the grass is gone,” said 2F chair John Fanning during that meeting.

Fanning later added in an email to Borderstan that locals “should all be mindful and respectful that we all have a role in protecting the park’s beautification and historical significance.”

To deter dog owners from walking their dogs in the inner circle, the NPS erected signs throughout the park. But someone stole those signs on two different occasions, Rose said.

“The original signs were posted on a pole in two different entrance areas of the park,” recalled Fanning. “The replacement signs, which were posted over a year ago on the smaller fencing area… went missing one by one.”

An anonymous letter that circulated through the Logan Circle community in March lamented that dogs had filled the park’s inner circle with bare patches, holes and poop. That letter, addressed to the NPS, asked for better enforcement of the no-dogs rule.

But some members of a recently created group called “Logan Circle Dogs” are crying foul over the rule. Members say banning dogs from the circle is “a slippery slope,” as the group wrote in response to that letter.

“It should be a reminder to respect our park, if your pup digs holes, stop it; if your pup pees on the statue, stop it,” the post reads. “Let’s all respect and enjoy our park.”

One of the group’s members, Tom Alexander, said the decision to restrict only dogs from the inner circle “doesn’t make any sense.” Alexander said he sometimes sees kids playing around or climbing on the statue, a double standard as far as he’s concerned.

“If the Park Service wants to restrict access to the area, it should include humans and dogs alike,” Alexander said. “Logan Circle is a living park in the middle of one of the nation’s largest cities, not a planned community with manicured lawns, and singling out dog owners and restricting their access to parts of the Circle is unfair and wrong.”

Alexander added the NPS should use its resources for “real problems like people using trees in the Circle as urinals or worse.”

“There are no such restrictions in similar areas of the Dupont fountain or statues at Thomas and Scott Circles,” Alexander said. “Will they be patrolling those areas as well?”