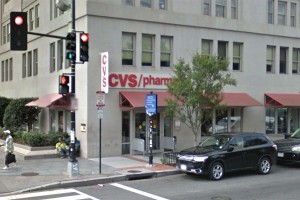 A thief with a knife threatened to harm two women on the U Street corridor after they attempted to get back the items the individual and an accomplice took from a pharmacy yesterday morning, police said.

The thieves just had left the pharmacy when the women approached them, according to authorities. It wasn’t immediately clear whether the women worked at the store. But at least one of women saw the thieves stealing soap, lotion and deodorant from the CVS and asked them to return the items.

“If you call the police on me, I’m coming back here for you,” one of the thieves told the women, while flashing a knife, according to police.

The thieves then fled into the east entrance of the U Street Metro station.

more stories
Previous
How to Learn About Fishing and Eat Fish Tacos on 14th St.
Next
Starbucks Seeks to Serve Booze at Yet Another D.C. Location