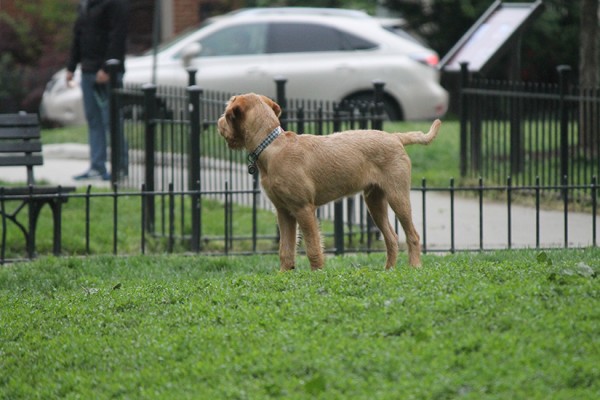 Updated at 10:48 a.m. Friday: The National Park Service contacted us to clarify its rule regarding the park’s inner circle. As it turns out, some of the information originally given to us was “incorrect.” Humans and dogs alike are banned from entering the circle. The NPS initially told us that only dogs were banned from that part of the park.

We’ve updated this article to reflect the clarification.

Yesterday, we reported on a dog fight between some Logan Circle locals and the National Park Service.

The disagreement centers on whether dogs should be allowed in the small, fenced-off circle that surrounds the statue of Major General John A. Logan in Logan Circle park. (As an aside, it’s important to mention that leashed dogs are allowed to play in the surrounding park itself, just not the area around the statue.)

The NPS says dogs should not be allowed in the inner circle, citing possible damage to the statue and grass around it. But members of a group called Logan Circle Dogs are crying foul.

In the comments section of our article, one reader pointed out “there is also a dog park ‘ruffly’ 2 blocks away [from Logan Circle]. I understand using the circle for neighbors to take their dogs out for a quick potty break, but having dogs play around it when there is a good park nearby doesn’t make any sense.”

Now, we want to know what you think. Do you stand with the local dog owners, or do you think the NPS is justified in banning dogs from the inner circle?

Let us know what you think in the poll below. And if you feel especially chatty, tell us how you feel in the comments below.