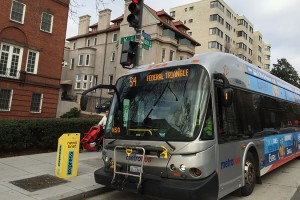 A future when buses cruise down 16th Street NW with greater ease during rush hour is at least four years in the offing, according to a recently released D.C. government report.

Work to bring dedicated bus lanes to 16th Street NW and eliminate some of the corridor’s bus stops might not wrap up until 2020 or later, says the District Department of Transportation’s “16th Street NW Transit Priority Planning Study” distributed to locals yesterday.

The report, dated March 2016, came after a series of DDOT meetings with locals and the Washington Metropolitan Area Transit Authority to discuss ways to speed up bus riders’ commutes on the S1, S2, S4 and S9 lines.

Last winter, DDOT announced it was moving ahead with plans to add bus-only lanes to 16th Street and remove stops at Newton, Lamont, V, Q and L streets NW.

Bus lanes are expected to come before stops are axed, according to the study.

DDOT is anticipating it will have the lanes ready between 2018 and 2020. But the stops wouldn’t disappear until at least 2020.

The agency is expected to update locals on its progress at a meeting in the fall.