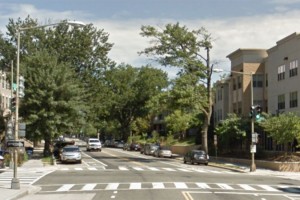 Two attackers with a knife left a man with a large cut on his head and lacerations on his right arm in Columbia Heights earlier this week, according to a police report Borderstan obtained today.

The assault happened on the 2900 block of 11th Street NW about 7 p.m. Tuesday. The area is about a block south of Tubman Elementary School.

The victim was walking down the block when someone hit him in the head with an unknown object, causing a sizable laceration, according to authorities. He then fell to the ground, where he received a kick to the face.

The man eventually got up and started to fight one of two people near him. The individual who wasn’t fighting the man pulled out a knife soon after.

The person with the knife then tried to stab the man, leaving cuts on his right arm in the process.

The attackers fled not long after.

The victim was brought to a local hospital, where he was treated and released.

A man also flashed a gun at two people near Tubman Elementary School last night, according to authorities.

The incident occurred on the 1300 block of Columbia Road NW about 7:15 p.m. Wednesday.

A man and a woman were walking in the area when police said a man rode up to them on a bicycle, asking, “Who this? Who this?”

The bicyclist then pulled out a handgun, pointing it at the victims.

Someone walked by soon after, scaring off the gunman.

Police said they’re looking for a black man who was wearing glasses, black pants and a puffy black coat with a hood.