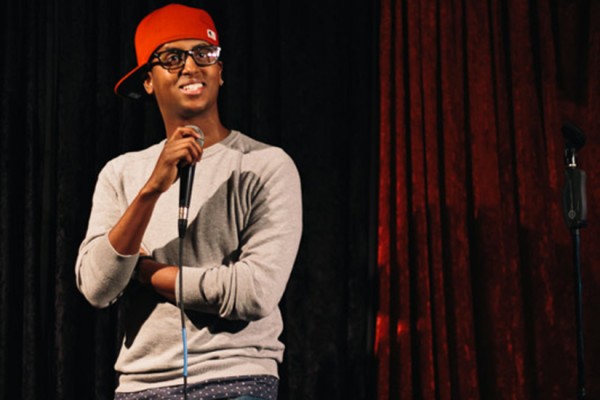 Dee and I go way back, 13 years to be exact. That’s because we went to the same high school in Arlington, VA. Back then, I saw him as very outgoing, an enviable quality during my cripplingly shy high school years. Not long ago, I saw him at a Wednesday night show at The Big Hunt in Dupont Circle.

I never really knew him in high school, so I was interested in catching up and learning what got him started on comedy.

Borderstan: So, how did you get started with stand-up comedy?

Dee Ahmed: I, at one point, was going to an open mic, just as an audience member with friends or by myself all the time at the Arlington Cinema and Drafthouse. It’s by far my favorite room in all of the D.C., Virginia, Maryland area.

I absolutely love that room for a couple of reasons. They keep giving me opportunities to go up and do my thing. But I was going there and I was watching a lot of comics that a lot of people see on a regular basis around here. You watch them long enough and you’re going to want to try it. Simple as that. And I had a friend that did stand-up twice and he’s someone I very much look up to.

He’s a very funny person and comedian, but he doesn’t do stand-up that often. He told me, if you do it, I’ll do it. I said okay. I found an opportunity to sign up to a mic, went to the mic. He backed out. I went up. And boom. I could not stop coming back.

So your first open mic was at Touchdown, not Arlington Drafthouse?

No, I was super intimidated by the Drafthouse when I first got there. You’d watch the guys that would go up and you’d just be in awe of what they bring to the table, some of them you’ve interviewed, Haywood Turnipseed loud boisterous laugh.

You can identify it a mile away.

And not just him, Tim Miller has a hysterical laugh. He only brings it out every once in a while, but you can notice it on the spot.

I need to hear it. I haven’t heard it. I had that conversation with him, but I don’t think he really laughed like that.

Yeah, with laughing and comics and stuff, I have a short fuse with laughing. I’ll laugh at a lot more than other comics will, but I imagine as I get older and further along in comedy that my laugh quota will be met and I’ll only laugh at weirder and weirder things, like someone bombing or someone doing something outrageous on stage. Something I hadn’t seen before. Then, I’d probably laugh. But as of right now, short fuse with laughter, I laugh all the goddamn time.

I feel like that would be my problem. It’s hard for me to tell a joke without feeling the need to laugh at it myself.

Well, you look at people like Ron Funches, who’s a professional comedian. He giggles all the time with a joke that he really likes. It’s part of his character.

So you’ve done comedy for a little over two years now?

Oh, no. I did not do it for almost two years [straight]. I took breaks. And if you’re not doing stand-up consistently, I don’t think it really counts.

Over the course of six months leading up to that summer [in 2014], I think I did maybe two or three open mics and the first one went really well. The second two, I bombed viciously. So, then I would just start going to mics and watching people. I would just try to figure out how they figure out jokes and stage presence. Just studying it, I guess. I read a lot more about comedy, watched a lot more on TV. Pretty much all of the time.

Then, that summer I had my first really good set and it was at the Arlington Cinema and Drafthouse or The Big Hunt or Science Club, one of those. I had a set where I kind of made the decision in my head, that was like, I’m doing this from now on, like this is me.

From what people have told me, it feels like a drug. Having a good night or a bad night doesn’t matter because you want to do it again.

Yeah, I can understand people making the comparison. I’ve never done really hard drugs or anything before, though. Let me put it like this, I don’t think I could go more than two weeks, probably just a week, without doing stand-up at least once. Because I think if I waited longer than that, I would eventually fall out of love with doing stand-up and I don’t think I would like that version of me as much as I like this version of me.

So, should we talk about our high school days?

Yeah, so why’d you bully me so much?

Haha, alright, for the record, no bullying took place from either party.

Just a lot of intense stares on her part and very confused looks on mine and I was scared. I was scared she was going to punch me in the neck.

Haha, let the record show that I never wanted to punch you in the neck, but let’s establish this. You were a year older than me in high school. We went to the same high school.

Well, I actually started there sophomore year, so I didn’t do freshman year there.

So, you only knew me for two years.

Yeah, because you graduated a year ahead of me. This is my experience of you, because I do remember you in high school. I saw you around and you were very popular and saw that you had a lot of friends. That was basically it, because I didn’t have any classes with you, so I didn’t know what you were really like. I knew you from a distance.

Dumb as a bag of bricks. No, I just liked meeting people; I liked talking to people. I think I’ve gotten better now as I’ve gotten older because I allow people to actually get a word in every once in a while. I was kind of a party animal in high school and I wanted to talk to people, hang out, joke around, really take in life. It felt like that was the right way to go about it.

People misinterpret being outgoing or being really gung-ho about talking to people. Part of it is because I just can’t imagine being by myself sometimes, but with comedy, I can. I realize that when it comes to being around other comedians and other people, I sometimes am very quiet and I just laugh. I just want to hear what everyone else has to say because it’s just fun.

If you want to see Dee Ahmed perform, he gets up at various open mics around the D.C. area, but definitely every Saturday night at 10:30 p.m. at the Arlington Cinema and Drafthouse.