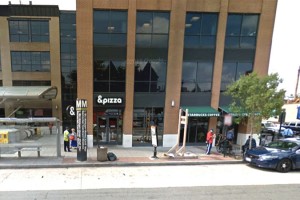 A man with a gun robbed a restaurant on the U Street corridor early this morning, police said.

Authorities didn’t identify the eatery in a police report. But a Starbucks and &pizza share the address.

The man entered the unnamed restaurant through a rear door and demanded money and cellphones from two people, while flashing a handgun, according to authorities. He then fled out the back door with two iPhones and $2,100 in cash.

Authorities yesterday distributed surveillance footage in connection with a burglary at a bar near the U Street corridor, too.

In the video, two men with hoods covering their heads are seen rummaging around behind the bar’s counter and later leaving through a door that one of them kicked open.

Police also announced today that they have nabbed another man in connection with a fatal January shooting that authorities have said was related to marijuana in Shaw.

Joseph Lee Jennings, a 35-year-old Southeast D.C. resident, was arrested Thursday and charged with murder while armed, police said. He had a warrant out for his arrest.

Shevlin, who worked at men’s clothing boutique Commonwealth in Adams Morgan, later was pronounced dead at a local hospital.