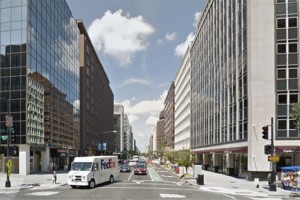 An assailant with something sharp slit a 61-year-old man’s throat a block north of Farragut Square over the weekend, police said.

The assault with the intent to kill happened on the 1700 block of L Street NW about 3:30 a.m. Sunday.

The victim was arguing with three people in the area when they punched him, according to authorities. One of the attackers then slit the man’s throat and cut his right arm with an unidentified object.

The condition of the man after the assault wasn’t immediately clear.

Someone also threatened to kill a man with part of a broken beer bottle and threw a mostly empty six pack at some cops near the DC USA retail development in Columbia Heights this past weekend, police said.

The victim was in the area when the attacker swung the broken beer bottle piece at him. “Do you want to die today?” the person with the glass asked, according to authorities.

Police officers eventually made contact with the suspect, who threw a six pack with two beers in it at them.

It wasn’t immediately clear if the cops arrested the person.