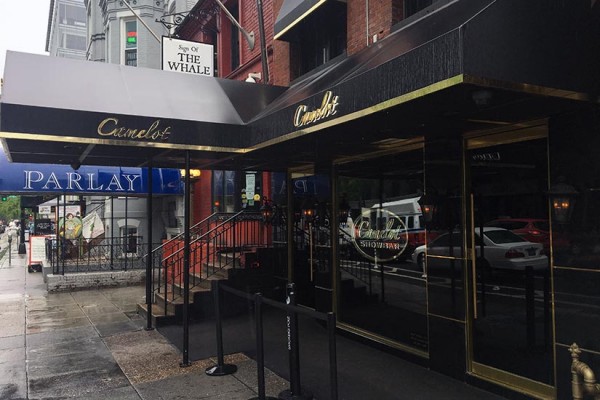 A man pulled out a knife at a Dupont Circle gentlemen’s club in a futile attempt to get an exotic dancer to go “upstairs” with him early yesterday morning, according to authorities.

The incident happened at Camelot Showbar at 1823 M St. NW about 1 a.m. Monday.

The entertainer was sitting next to the man at the strip club’s lower-level bar after she performed a dance, police said. The man then flashed his knife, telling the dancer they are “going upstairs,” according to authorities.

The woman told him they weren’t allowed to go there. She eventually got away from him when she left to dance some more.

“When she got up to dance for her next set, she calmly told one of our doormen that the man was carrying a knife and our security team immediately called the police and isolated the customer at the bar until the police arrived a few minutes later and removed him from the club,” said someone with knowledge of the incident, speaking to Borderstan on the condition of anonymity. “She smartly played it cool as not to escalate the situation until she had an opportunity to tell security.”

Police arrested 27-year-old Brett Gonzales and recovered a folding knife in connection with the crime. Information on his lawyer wasn’t immediately available.