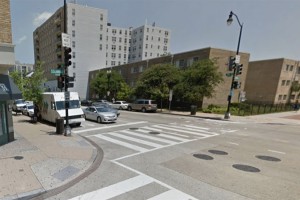 (Updated at 2:30 p.m.) A man was arrested in connection with the shooting of a woman in Columbia Heights last night, police said.

Kevin Andrade, 25, was apprehended after the domestic violence on the 3000 block of 14th Street NW about 11 p.m. Thursday. Information on his lawyer wasn’t immediately available.

The victim was rushed to a local hospital, where she is listed in critical, but stable condition, according to authorities.

The scene of the shooting, which is just south of the Columbia Heights Metro station, was where a stabbing happened last week. 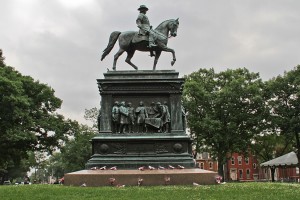 Logan Circle park will come alive with flags, speeches and music from a brass band on Memorial Day.

The Logan Circle Community Association (LCCA) will hold a free celebration in the park that includes an appearance by newly appointed U.S. Army Secretary Eric Fanning, the singing of the national anthem from the Washington Capitals’ Bob McDonald and music from a brass quintet.

The celebration will begin at 1 p.m. with a presentation of the colors from the junior officer training corps, followed by the singing of the national anthem, a religious invocation, and then a presentation from historian and author Gary Ecelbarger.

Later, Fanning will lead a wreath-laying ceremony at the statue of U.S. Civil War general John A. Logan. Fanning, who was only officially confirmed to the position last week, is the first openly gay head of a military branch in the U.S., as reported by the Washington Post.

Attendees are encouraged to bring picnic blankets, lunches — and yes, even dogs — to the event.

END_OF_DOCUMENT_TOKEN_TO_BE_REPLACED 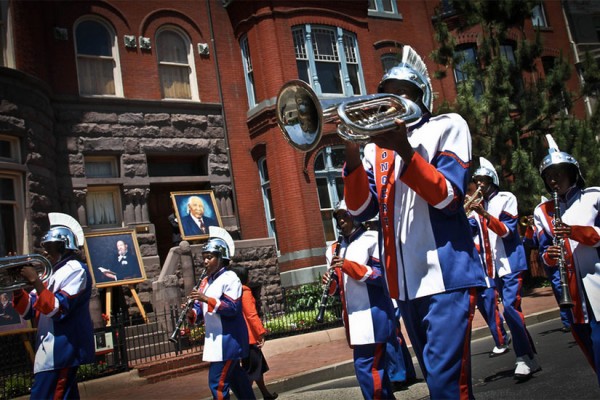 (Updated at 2:55 p.m.) Trumpet players, cheerleaders and other people are set to march from Shaw to Logan Circle as part of an evangelical Christian church’s annual parade this weekend.

The United House of Prayer for All People‘s parade is slated to bring congregants from its church at 601 M St. NW to the Logan Circle traffic circle Saturday morning.

M Street NW from 6th to 7th streets NW is expected close from 7 a.m. to 2 p.m., according to the Metropolitan Police Department.

Other road closures from 9 a.m. to 2 p.m. are expected to include:

A United House of Prayer representative didn’t have an immediate comment on the parade or provide details on exactly when it will begin and end.

But Borderstan reported in 2013 that the marchers arrived about noon at the traffic circle’s park, where several locals gathered to watch. “Sweet Daddy” Grace, the church’s founder, lived at 11 Logan Circle NW before he died in 1960. 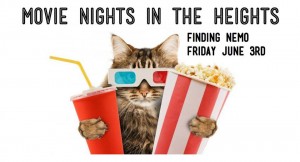 “Finding Nemo,” “Inside Out” and other family-friendly films are slated to get outdoor screenings in Columbia Heights this summer.

The Columbia Heights Initiative is scheduled to hold “Movie Nights in the Heights” at the Tubman Elementary School Field (3101 13th St. NW) on four Fridays in June, starting next week.

The free screenings begin at sundown. But organizers will have games for children from 6 to 7:30 p.m.

Interested moviegoers are encouraged to RSVP through the links above.

Karin Riley Porter is a criminal defense attorney with Price Benowitz LLP. Ms. Porter is a former prosecutor who works out of her office in Fairfax, Virginia. She handles white collar, sensitive misdemeanor, complex DUI, and felony cases in Northern Virginia.

A group called The Pink Pistols are celebrating a major victory in both the gun control as well as the gay rights arena, following a finding that portions of D.C.’s concealed carry requirements are “likely unconstitutional.”

Although the D.C. Attorney General plans to appeal the decision and request a stay of the injunction, the decision may nonetheless have a ripple effect on similar gun control legislation in other states. In addition to the legal ramifications, the publicity surrounding the decision has brought the Pink Pistols’ message into the public spotlight, a victory in and of itself.

The Pink Pistols feel that animus toward perceived sexual orientation “constitutes a clear and present danger to the sexual-minority community that predicates just cause to carry a firearm for self-defense.” Pink Pistols leader Gwen Patton hopes increased public awareness that the LGBTQ community is arming itself will have a deterrent effect on hate crimes.

Current D.C. regulations require applicants seeking a concealed carry permit to meet multiple gun safety, age, personal history, and health requirements, all of which must be verified by a member of the Metropolitan Police department during an interview with the applicant.

The pending lawsuit does not challenge any of these requirements, which are mirrored in nearly every state’s concealed carry application process. Rather, at the heart of the lawsuit is D.C.’s “good cause” provision, which provides that the Chief of the Metropolitan Police Department “may” issue a concealed carry permit only “if it appears that the applicant has good reason to fear injury to his or her person or property or has any other proper reason for carrying a pistol” D.C. Code § 22-4506(a).

END_OF_DOCUMENT_TOKEN_TO_BE_REPLACED

A would-be thief pulled out a gun and tried to rob a man in Park View earlier this week after he said he wasn’t from the area, according to a police report Borderstan obtained today.

The attempted robbery happened on the 3000 block of Georgia Avenue NW about 6:30 a.m. Tuesday.

The victim was walking from a store across from the Bruce Monroe Community Park when someone came up to him, authorities said. That individual then asked the man whether he was “from around the area.”

The man, who lives in Maryland, said he didn’t reside in the neighborhood. The person who approached the victim then flashed a handgun in an effort to rob the man.

But the victim ran to his car and drove away.

The District Department of Transportation (DDOT) is scheduled to host a public meeting next month to talk about its planning study to improve an area that includes:

The purpose of the study is to enhance the streetscape and to evaluate the possibility of a bicycle facility or cycle track along Pennsylvania Ave. and to “assess the operational feasibility of a contraflow bus lane on H Street NW between New York Avenue and Pennsylvania Avenue,” according to a DDOT notice. 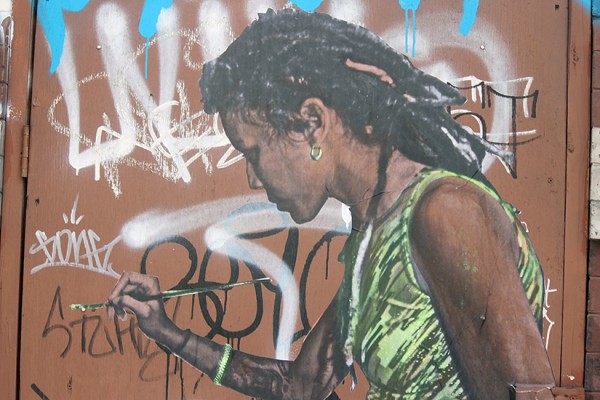 Town Intends to Stay Put — Town Danceboutique, the popular gay club near the Atlantic Plumbing development, does not intend to close despite the sale of its building. “This sale was not a surprise to us and we have a great relationship with our new landlord who is excited to have us as their tenant,” the club said in a statement. “We also enjoy solid lease terms and we intend and fully expect to be throwing parties in our current location for years to come.” [DCist]

See Inside the Obamas’ Kalorama Home — This 8,200-square-foot mansion in Kalorama is where the Obamas will live. Here’s your chance to virtually step foot inside. [Washingtonian]

MPD Not Growing — 851 D.C. police officers have retired, resigned, were terminated, or died since 2014, and cops are continually walking away from the job, the City Paper reports. But why? Money, the increasing difficulty of the job and competition from other cities are to blame, say current and former members of the police force.  [Washington City Paper] 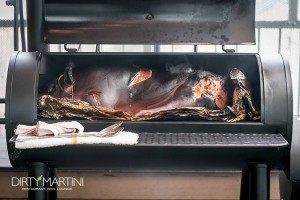 Locals will be able to go whole hog for free during a pig roast at Dirty Martini later this week.

The bar and lounge at 1223 Connecticut Ave. NW will host a pig roast Friday from 4 p.m. to 10 p.m., according to a Facebook event post.

Bartenders will sling tiki drinks during the event, said bar representative Salaam Mufti. Portions of the roasted pig are free, Mufti said, as long as patrons buy at least one drink. The festivities will also include games of corn hole and “an overall nice BBQ type vibe,” Mufti added.

The bar hosts pig roasts on the last Friday of every month. 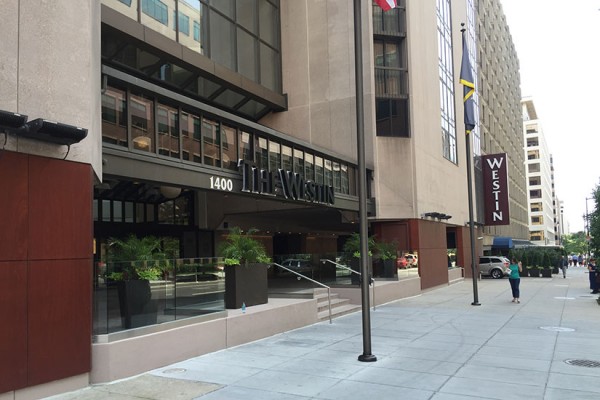 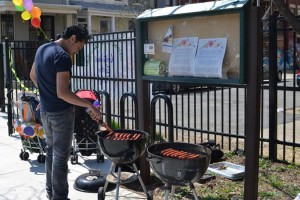 A Columbia Heights nonprofit is inviting neighbors to clean up, then cook out in the neighborhood tonight.

Locals will meet at the office of the Columbia Heights Initiative (3400 11th St. NW) this evening at 5:30 p.m. to help beautify the surrounding streets. The cleanup will be followed by a cookout where neighbors can socialize and eat together.

“Join us for our monthly community clean ups,” reads a volunteer page. “Following each clean up will be a hangout where volunteers can spend time getting to know each other and building community.”

Last call to sign up for tonights community clean up! Join in on the fun! sign up here https://t.co/aJSiykTEgK 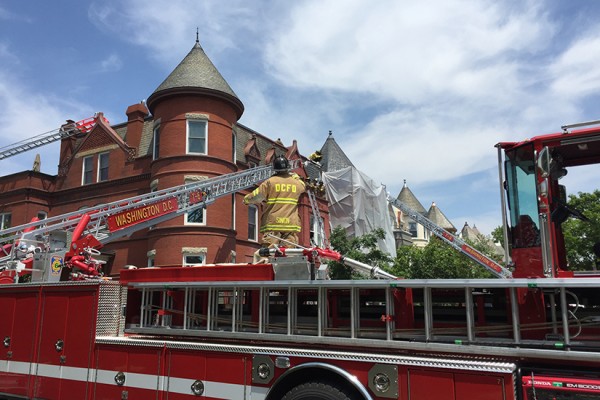 (Updated Friday at 5:11 p.m. with video of the incident. See above.) A man threatened to shoot a worker at a Columbia Heights restaurant in an attempted robbery yesterday afternoon, police said.

The incident happened in the IHOP on the 1400 block of Irving Street NW about 5:30 p.m. Tuesday.

The would-be thief made his threat with a handwritten note on a takeaway menu he gave to the IHOP employee, police said.

“This is a robbery,” the note said, according to authorities. “Don’t say sh-t, or I will blow your f–king brains out.”

But the man never showed a weapon and ran away after the worker said the cash register was empty.

END_OF_DOCUMENT_TOKEN_TO_BE_REPLACED 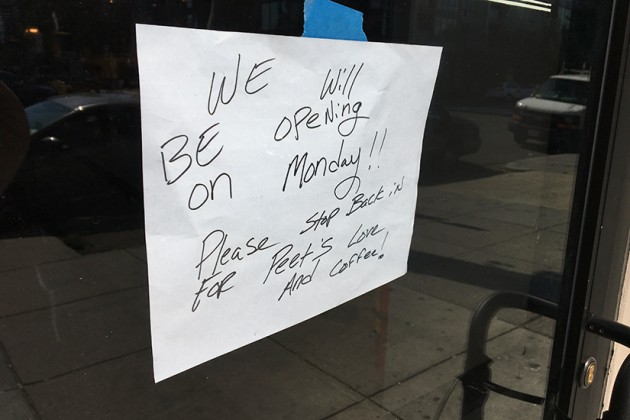 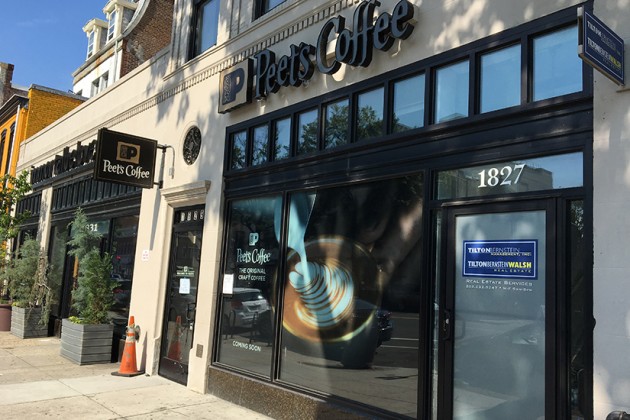 A national coffee chain is slated to invade the 14th Street corridor by Memorial Day.

Peet’s Coffee and Tea is set to open its doors at 1829 14th St. NW on Monday, according to a sign on the door of the forthcoming business.

“We will be opening on Monday,” the sign reads. “Please stop back in for Peet’s love and coffee!”

Employees at two other Peet’s locations in D.C. confirmed the opening date.

When it opens, the new Peet’s will be located on the same block as Black Cat, Ted’s Bulletin, Bar Pilar and Source. The new coffee shop will also compete for customers against the nearby Wydown, Peregrine Espresso, Slipstream and Dolcezza coffee shops. 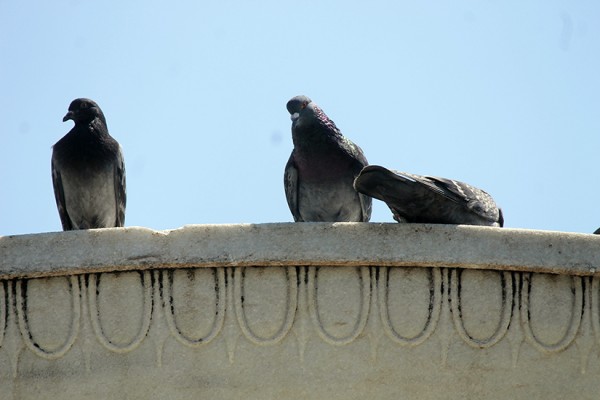 Obama in Kalorama — It appears as though the Obamas are moving to the Kalorama neighborhood. Although it wasn’t immediately clear which house the first family might buy, there are plenty of lavish homes to choose from. [DCist; Washingtonian]

Metro to Share News About Violent Crime — Metro will now notify the public about violent crimes on the day they happen. The decision comes after outcry over news of a rape on the Red Line was not shared with the public for more than a month. [Washington Post]