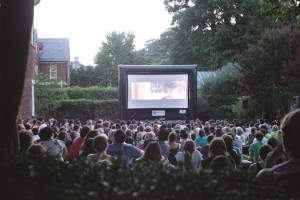 Jane Austen fans will have something to see at the Dumbarton House (2715 Q St. NW) later this month.

The fifth annual incarnation of the Jane Austen Film Festival will kick off with a screening of “Sense & Sensibility” on June 29, announced event organizers. The museum will also screen “Emma” on July 13 and “Pride & Prejudice” on July 27.

Though the event is free for museum members, all others must pay $6 to attend one screening or $15 to attend all three. Attendees are encouraged to bring blankets. Guests with chairs will be asked to sit in the back of the lawn, organizers said.

The full list of this year’s Jane Austen films is below:

The museum will also open its doors for self-guided tours from 7-8:15 p.m. during the screenings.

Why Jane Austen at Dumbarton House? Austen was writing and publishing these three timeless, engaging novels during a time of great tumult between the United States and Great Britain: The War of 1812, which started to brew in 1811 (Emma), heat up in 1813 (Pride & Prejudice), climax in 1815 (Sense & Sensibility), and ended in early 1816. Dumbarton House’s primary owners, the Nourse Family, were in residence 1804-1813, and second resident Charles Carroll played first host to First Lady Dolley Madison at Dumbarton House on August 24, 1814, in her hurried departure from the White House as the British approached to burn it.